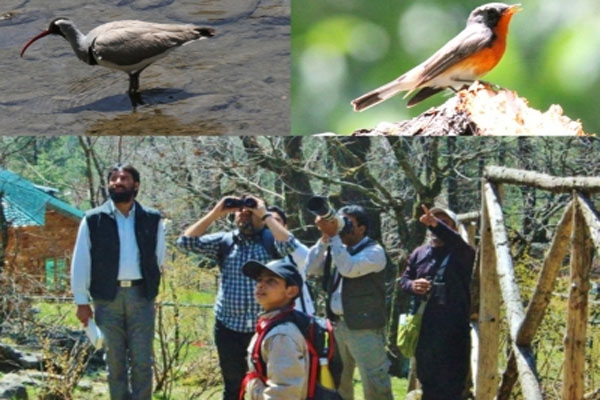 Known as the ‘Queen Wetland of Kashmir’, Hokersar — also called Hokera — attracts half a million winter birds every year as well as thousands of birdwatchers. Spread over 1,375 hectares, it plays host to winged guests from Siberia, Turkey, Central Asia and eastern Europe between October and April.

However, the past two winters, city ornithophiles observed that the migratory birds have dwindled in numbers in Hokersar. They blamed it on the “ill-planned” dredging work in the area, which started in July 2020. It has severely damaged the land because dredged soil was dumped at the site during work to install a flood management system.

Adding that the haphazard dredging had hindered the movement of thousands of migratory birds, birdwatchers have urged the administration to look into the issue.

“The water levels have dipped, because of which the number of winged visitors we get in winter has declined,” said a senior member of Kashmir Birdwatch, a local club that boasts 11,000 members.

According to the Annual Asian Water Bird Census, Kashmir recorded 8,07,554 birds in 2020 while the number dropped to 6,48,322 in 2021. The report reveals that two Ramsar sites (Hokersar and Wular) saw a substantial decrease in bird population in the recent years – Hokersar wetland witnessed a drop from 4.8 lakh (2020) to 65,000 in 2021, while at Wular Lake, the population of birds declined from 1.2 lakh to 707 birds in the same time period.

The primary cause – extensive damage to the wetlands

Dr Irfan Rashid, senior assistant professor at the Department of Geoinformatics, University of Kashmir, attributed the decrease in the population of birds in the wetlands to land-system changes, rapid urbanisation and increase in agricultural activities around these areas.

“The breeding and nesting grounds are mostly marshy areas in these wetlands. The marshlands have undergone a substantial change due to continuous land filling and encroachments. The water spread and depth has also decreased in the wetlands over the years, thereby affecting the habitat of the birds,” he explained.

Commenting on the census, he pointed out that the bird count was not arrived at correctly.

“Such drastic decline from lakhs to mere thousands is not possible. They either conducted the survey through ill-trained personnel, or the samples were not taken properly. The use of advanced drone technology could have helped in arriving at the precise count, though I believe it was not put to use,” Dr Rashid said.

Local birdwatcher and college student Reyan Sofi, who has spotted 204 species of birds in the Hokersar wetland so far, said the birdwatchers held a meeting with the wildlife officials and the divisional commissioner of Kashmir in August 2021. They demanded a scientific assessment of the wetland by experts to gauge the extent of the damage. They also demanded restoration of the natural paths of water and an increase in security guards to check encroachments. But their demands have not been met yet.

Moreover, the count of birds in Hokersar decreased far more considerably when compared to the bird population in other wetlands in Pampore, Wular and Hygam.

“Birders have repeatedly highlighted the deplorable state of the wetland. Their efforts prompted the government to take some measures in September last year,” said Sofi, who has been extensively documenting birds around Hokersar since 2015.

The student further said that the dry areas around the wetlands had been filled and a flood channel originating from the Jhelum had been diverted to the wetland.

“The solution, though temporary, has increased the water level in Hokersar. But they have also dug a 60-ft nullah in the middle of the wetland, which pumps out the water entering the wetland. This should be stopped immediately,” Sofi emphasised.

Dr Rashid further stressed that the wetlands can be salvaged through effective policy-making and by conducting a proper scientific assessment of these ecologically fragile zones. A separate wetland policy should be framed, he added, by bringing experts from all concerned departments on board.

Human interference the other culprit

The ibisbill (Ibidorhyncha struthersii), a wader that inhabits the broad, stony rivers of the Pamirs, Himalayas and the Tibetan Plateau, is fast dropping in numbers. The bird is usually spotted at several sites along the river Sindh, in Wayil, Wussan, Kijpora, Sonmarg, Neel Grath and Baltal.

However, human interference in the form of mining (extraction of sand and boulders from the river), human presence (movement of local people, tourist activities and fishing) and grazing by livestock (sheep, cattle and goat along the riparian areas and islands in the river) has affected the birds, including the ibisbill, and their habitats.

“Our surveys tell us that there was hardly any breeding of ibisbill in the Sindh area last year,” said a member of Kashmir Birdwatch.

Another researcher and birder Iqram ul Haq explained that since ibisbills prefer a particular kind of habitat — they are partial to high-altitude, boulder-strewn rivers — they are prone to local extinction if this threat continues.

“Immediate action needs to be taken to save the bird as most of the areas inhabited by the ibisbill are not protected. Research organisations and NGOs need to highlight the plight of the birds and approach authorities like the departments of wildlife protection and mining to ensure that its breeding grounds are protected,” said Haq, adding that mining needs to be checked at the sites inhabited by the bird.

“These migratory spring birds are in our folklore more than those residing here permanently, perhaps because they signal the end of the gloomy winter,” he said.

A hotspot for birdwatchers

In the past three years, a large number of birders from across India have been flocking to Kashmir. Clubs like Kashmir Birdwatch have been creating awareness on the avifauna in the valley and also encouraging birding among youth.

“By now, we know which birds can be spotted in which month. This documentation helps attract more birding tourists to Kashmir. It also generates jobs for locals,” said Intesar Suhail, co-founder of Kashmir Birdwatch and Wildlife Warden, Shopian.

Kashmir Birdwatch is planning to put together a calendar for sure-shot findings this year.

“We are aiming to achieve almost 100 percent sightings through the calendar and by drafting seasonal itineraries,” Suhail said.

Jainy Maria, a Bengaluru-based birder who’s been visiting Kashmir since 2010, said birdwatching has picked up among locals in the past few years.

“It sensitises people towards the environment, as well. It’s a great change,” said Maria, who has photographed more than 1,100 birds across the country.

Moreover, according to Regional Wildlife Warden Kashmir Rashid Naqash, there’s been a remarkable increase of birders in this region in the last decade.

“This interest in birding has raised awareness not only about the birds but their habits and habitats, as well. The best part is the contribution to science that comes with reporting on new species spotted. Birders across the country get excited to know about some unique birds, and they, too, get inclined to visit,” Naqash said.

He noted that proper documentation was the first step to conservation.

“Knowing birds means knowing their habits and habitats, their issues and challenges. These birders, even if they can’t act suo moto, can help spread information and can act as the citizen’s voice to bring change for good,” he emphasised.