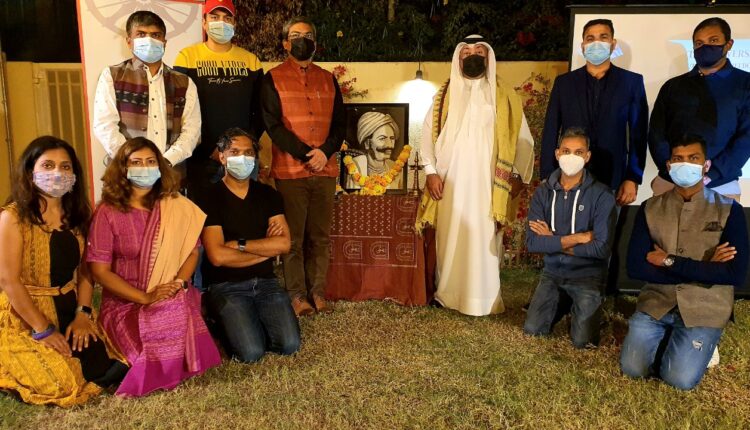 Dubai: Expatriate group GOOD (Global Odias for Odisha’s Development) organised the 213th birth anniversary celebrations of Veer Surendra Sai in Dubai on January 23, the day he was born back in 1809.

This is only the second time Veer Surendra Sai’s birth anniversary has been celebrated outside India. GOOD members celebrated it for the first time in 2020.

A symbolic and commemorative function was organized, strictly adhering to specific regulations set by local authorities to prevent the spread of COVID-19. Because of the stringent guidelines of hosting one person per four square meters of venue space, the number of people attending the event was deliberately kept low and it was organized in an outdoor setting.

This year’s celebrations had a special attraction – the presence of Eminent Emirati Singer Yasser Habib as the Chief Guest. Yasser Habib is a popular singer and citizen of the UAE. He became an instant sensation among the Indian diaspora when his version of Mahatma Gandhi’s favorite bhajan – ‘Vaishnava Jana To’ was released on Gandhi Jayanti October 2, 2019) to mark the 150th birth anniversary of ‘Father of the Nation’.

The function started with the traditional lamp lighting ceremony when the inaugural lamp was lit by Chief Guest Yasser Habib. All participants then paid floral tributes to the legendary freedom fighter.

A display of Veer Surendra Sai’s valor, bravery and heroism followed soon after his address.

Audio visual presentations on Veer Surendra Sai’s life and times were made. Memorable occasions like his first rebellion (when was only 18 years old), his escape from Hazaribagh Jail and subsequent leadership of the 1857 Sepoy Mutiny in the central parts of India were mentioned.

The highlight of the evening was the special video address by Padmashree Haldhar Nag. In his video address, Nag expressed his happiness as National Hero Veer Surendra Sai’s Birth Anniversary was being observed in a far-off land like Dubai. He congratulated the organisers on this effort and sent his best wishes. An electrifying atmosphere was created when Nag recited the last verse of his great poetic work ‘Sundar Sai’.

The meeting ended with the National Anthems of both India and UAE.

According to a senior GOOD Member, Captain Soumya Ranjan Patnaik, who is the President of a leading shipping company based at Dubai, such a function will always be needed to celebrate the life and times of this legendary fighter, who has always been under-rated as a freedom fighter. He stressed that GOOD will continue to thrive for more such initiatives whereby Odisha can be highlighted on the world stage.

Priyadarshee Panigrahi, General Manager with a leading a consumer goods company, also from GOOD said, “Despite the pandemic, we organised this small but symbolic celebration to ensure that tales of Veer Surendra Sai’s legacy and bravery continue to be propagated at an International level.”

Rajat Rath, Finance Manager with a leading telecom company, also a founding member of GOOD, re-emphasized on the strong need to collect all relevant information and papers available today, on Veer Surendra Sai. Many important documents and records of his life continue to languish in the archives of neighboring states of Chhattisgarh and Madhya Pradesh. An effort to collate, restore and preserve them is needed.

GOOD was at the forefront of an international campaign to restore air connectivity to the newly established Veer Surendra Sai Airport at Jharsuguda. GOOD had also undertaken efforts to popularise Nuakhai at a global level. Last year, GOOD had organised the first ever celebrations of Veer Surendra Sai’s birth anniversary on foreign soil.