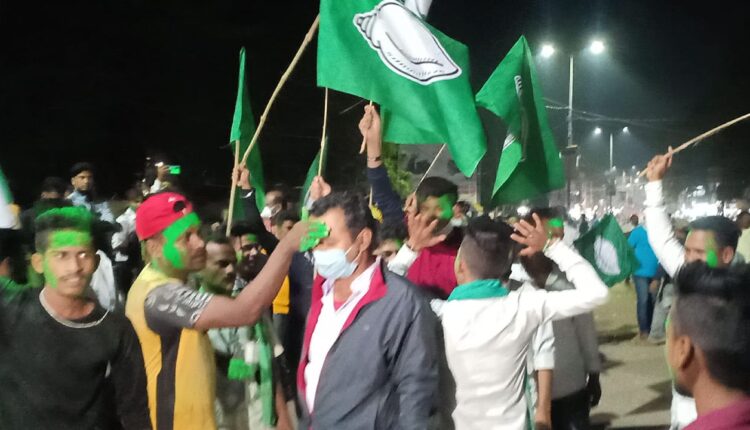 Bhubaneswar: The ruling Biju Janata Dal (BJD) continued its dominance in the electoral fray as two of its candidates registered an emphatic win in the by-elections to Balasore Sadar and Tirtol assembly seats.

Swarup, a former Councillor of Balasore Municipality, thrashed his opponent by a margin of over 13000 votes which is even bigger than the last assembly elections.

The Indian National Congress continued its dismal performance in the state.  Mamata Kunda had to settle for the third spot with less than 4976 votes.

In last assembly contest between BJP’s Madan Mohan Dutta and BJD’s Jiban Pradip Dash, the victorious Dutta polled 74610 votes with vote share of 47.26 percent. Dash had bagged the second position with 61304 votes with a vote share of 38.79 percent.

Independent candidate Benudhar Barik who caught the attention of one and all for his unique style of campaigning failed to make a dent in the political prospects of his opponents. He polled a meager 1252 votes (0.77) placing him at fourth among six candidates and on top among the Independents.

For Balasore Sadar seat, two fresh faces were chosen by the major parties for the big battle. While BJP fielded Manas to capitalize on the sympathy vote, Swarup was picked as a surprise move apparently to plug the dissenting voices. Several senior BJD leaders frequented the coastal town to keep the house in order as rumour mill was in overdrive of fissures within the party. Senior leaders Jiban Pradip Dash, former MP and district BJD president Rabindra Jena were hardly seen sharing poll platforms.

An audio clip of conversation between Dash and a party worker to vote for either BJP or Congress candidate led to his suspension, a day before he quit the party and barely four days ahead of counting day.

In Tirtol, the politically charged constituency was a cakewalk for the ruling party as it fielded the son of the departed leader Bishnu Charan Das, a six-time elected leader from Jagatsinghpur and Tirtol constituencies. Bijaya Shankar was the unanimous choice considering the popularity of his father in the constituency, who was also a close aide of legendary leader Biju Patnaik.

The young leader defeated his nearest rival with a margin higher than his father defeated his opponent Ramakanta Bhoi in the last election held last year. Bishnu Das had won the election by a margin of 40, 477 votes.

“I congratulate the winning candidates of the BJD from Balasore Sadar and Tirtol in the by-election. The wins are the result of your immense love and uninhibited support. I thank all the party workers for winning the hearts of people and reaching out to them. I thank, especially women voters, who stepped out of their houses to exercise their franchise in COVID times. This win is your win. We shall continue to strive for your welfare and development,” BJD supremo Naveen Patnaik said after the results.