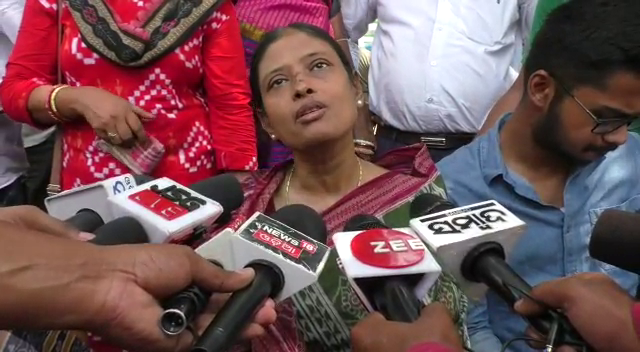 Jharsuguda: Maintaining its winning streak in by-polls, Biju Janata Dal (BJD) registered a landslide victory in the Brajrajnagar Assembly by-poll with a margin of over 66,225  votes .

While counting of votes was held in 20 rounds, ruling BJD continued to lead from the first round itself.

Total 14 tables were put up for the vote counting held at Jharsuguda Engineering College, 60 officials were engaged for the purpose with three staff at each table. Elaborate security arrangements were put in place to avert any untoward incident during the vote counting.

“I am very grateful to CM Naveen Patnaik for having faith on me and giving me ticket for the by-poll. I also want to thank party workers who worked really hard with me in scorching hit for the by-poll. Besides, I am thankful to the people of Brajrajnagar for their support. I will work really hard for overall development of the constituency,” said Alaka Mohanty after the poll results.

People of Brajrajnagar were pleased with my husband’s dedication and works for the constituency during his tenure of two and a half years. The people reposed their faith in me and voted for me in large numbers. I will try my best to stand up to their expectation.

Worth mentioning, the by-poll was necessitated following the untimely demise of BJD’s Kishore Mohanty in December last year.

The Assembly constituency is considered to be the stronghold of all three parties–BJD, BJP and Congress. The seat was with Communist Party of India (CPI) and Congress till 2009 and later went to BJP in 2014. Ruling BJD grabbed the seat in the last General elections held in 2019.