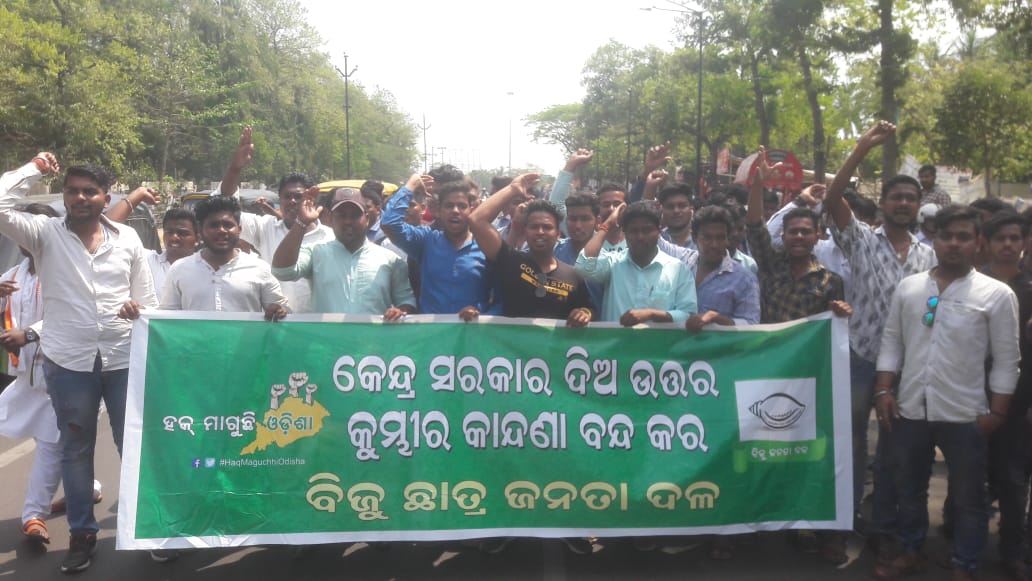 Bhubaneswar: A day after the announcement of poll dates, BJD launched ‘Haq Maguchi Odisha’ political campaign alleging Centre’s partiality and negligence towards the development of the State.

Thousands of protestors of Biju Chhatra Janata Dal (BCJD) and Biju Yuva Janata Dal (BYJD) took out the rally at Lower PMG in Bhubaneswar seeking replies from the Centre to a number of questions.

“Even as the mineral and natural resources rich Odisha is playing a key role in the development of the country, the Centre has been neglecting the State for political reasons. The Centre has been deceiving Odisha people in exchange of high revenue earning from the State,” the BJD said in a release.

“Through the ‘Haq Maguchi Odisha’ campaign, the party will corner the BJP-led Central government to expose its step-motherly attitude towards Odisha. Subsequently, the campaign will be extended to other districts of the State,” stated BJD’s youth wing president Amaresh Patri and BCJD president Ranapratap Patra in a release.

The campaign will be intensified by holding roadside meetings from panchayats to villages in all the districts against BJP at Centre. The youth will be approached to join the movement in giving justice to Odisha, the youth leaders said.