BJD targets Centre for failing to create employment in Odisha 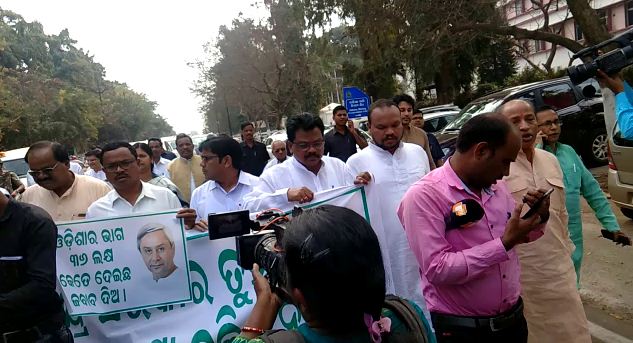 Bhubaneswar: The ruling Biju Janata Dal (BJD) on Friday protested against the Centre for failing to generate employment for the youth of Odisha.

The move of the ruling party came a day after the state youth wing of Bharatiya Janata Party (BJP) held a protest rally by marching towards state Assembly over growing unemployment.

BJD MLAs who joined the rally from the Assembly to Raj Bhavan submitted a memorandum to Governor Prof Ganeshi Lal. The memorandum was addressed to President Ram Nath Kovind.

It said that the BJP-led NDA government had failed to deliver the promises on the basis of which it had been elected by the people in 2014.

“While the BJP-led NDA government has failed on all fronts, it has utterly failed to address the problem and prospect of the youth of our country. BJP had promised two crore jobs each year. If this would have been a fact, more than 10 crore youths could have been appointed by the Central government. Odisha could at least have a share of 50 lakh youths employed in different jobs,” said the memo.

The Central government uses the natural resources of the state through the public sector undertakings (PSUs) and generates huge revenue. But there is hardly any instance of appointing the aspiring youths of Odisha, it said.

“We have demanded that the Central government should come out with the list of youths of Odisha being employed in central PSUs like MCL, NALCO and IOCL,” said BJD MLA Sanjay Das Burma.

He said while the state government is trying to create employment opportunities through different programmes, the BJP is spreading misinformation among the youth and misleading them through mobilisation against the government.

With Odisha facing general and Assembly elections simultaneously, the growing unemployment seems going to be a major issue.

Earlier at a rally in Rourkela on February 6, Congress President Rahul Gandhi had attacked both Chief Minister Naveen Patnaik and Prime Minister Narendra Modi for rising unemployment in the state.