BJD veterans Dama-Bishnu bury the hatchet, vow to root out BJP in Odisha 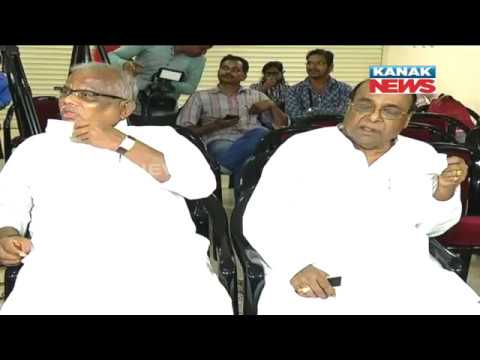 The two veteran BJD leaders were seen in a completely different avatar while sharing dais today at party’s extended executive meet at Kujanga in Jagatsinghpur district.

Rout, who had publicly slammed Das on many occasions for various reasons, softened his tone today and shifted the blame on media persons.

“I had nothing personal with Das and rather it’s a creation of the media. We are in BJD and will work together for the betterment of people,” said Rout.

Coming down heavily on electronic media reporters, the BJD veteran said: “It was all created for TRPs (Television Rating Points).”

Echoing the same view, Das, who was often termed as arch-rival of Rout, seemed to have forgotten all the past controversies and war of words and vowed to strengthen BJD at the grassroots level.

“Only journalists had written like that, or, otherwise, there is no personal enmity between us. We all are committed to work for strengthening the party,” said Das, who was recently named chairperson of State’s Planning Board.

While party workers and locals witnessed a new political development today in the district, one who played a key role in making Rout and Das bury the hatchet is Rout’s son Sambit Routray.

Sambit organized a massive rally from Rahama to Kujanga with hundreds of his supporters. He too slammed the media by saying there was only a “disagreement” between his father and Das and nothing beyond that.

“They are our elders and sometimes disagreement happens. But, I am sure, they will come together and work to strengthen the party in the district,” the Rout scion said.

Meanwhile, political observers in the state view the new “camaraderie” between Rout and Das as an attempt to give a tough fight to BJP in Jagatsinghpur in the upcoming Assembly elections as the saffron party has increased its activity in the area since inauguration of IOCL refinery in Paradip.

Sense of caring and sharing should be renewed: Kovind