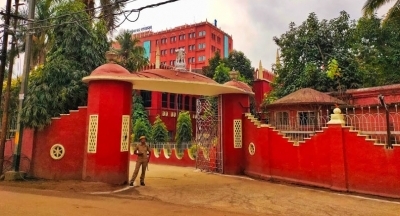 Bhubaneswar: The Bharatiya Janata Party (BJP) and Biju Janata Dal (BJD) on Friday indulged in blame game over establishment of a permanent bench of Orissa High Court in western parts of the state in the wake of arrest of 43 lawyers and suspension of licenses of all advocates of Sambalpur for violence during a protest over the same issue.

Five BJP MPs from western Odisha on Friday wrote a letter to Chief Minister Naveen Patnaik for a fruitful solution into the matter.

The Union Law Minister has made statements in Parliament and written letters to the Odisha government several times for an agreeable resolution towards establishment of the permanent bench of the Orissa High Court in the Western part of Odisha, the MP said.

“The delay and lack of commitment of the state government neither in holding consultation with the Chief Justice of Orissa High Court and Governor of Odisha nor providing the composite proposals sought by the Union Law Ministry has led to the present unpleasant law and order situation leading to the arrest of dozens of lawyers in Sambalpur and suspension of licenses of 43 odd lawyers for one and half year and suspension of the license of all the lawyers of Sambalpur Bar Association till further order,” said Pujari, who is a member of the same bar association.

As per procedure, he said, the state government should submit a composite proposal mentioning the exact location for establishment of the HC bench, its jurisdiction and assurance to provide required infrastructure for it.

The BJP MPs demanded the state government to address the unprecedented situation without any further delay.

They demanded the state to release the arrested lawyers and take up the matter with the Bar Council of India to revoke the suspension of licenses of the lawyers in the interest of the poor litigants as well as restoration of peace, tranquillity and conducive healthy atmosphere in the state.

Commenting on the issue, BJD MP Sasmit Patra blamed the Centre for the delay in setting up of the HC bench.

Chief Minister Naveen Patnaik has written letters to Centre several times before and again on September 5, 2018 assuring the Centre to provide all adequate resources including infrastructural and financial resources for setting up of the western Orissa High Court bench, Patra said.

“Despite CM’s blank cheque for all works in this regard, why the Centre is not proceeding to name the location in consultation with Orissa HC is surprising,” he said.

The Rajya Sabha member said the Centre can only establish the High Court bench through the Parliament by exercising its powers under Entry-78 of the Union list in the Constitution.