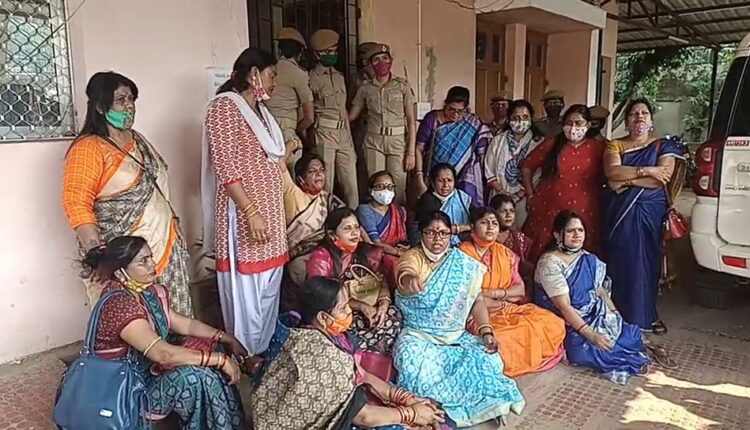 Bhubaneswar: Several leaders and workers of the BJP Mahila Morcha and Congress today staged demonstration before the office of Odisha State Commission for Protection of Child Rights (OSCPCR) here over the murder of a five-year-old girl in Nayagarh district and multiple reports of missing of minor girls in the state.

Led by Smruti Patnaik, members of the BJP Mahila Morcha staged a sit-in in front of the office and resorted to sloganeering. They also tried to barge into the office but were stopped by police.

“OSCPCR chairperson Sandhyabati Pradhan had earlier said that the minor girl might have been sacrificed. However, an audio clip of minister Arun Kumar Sahoo pertaining to the case had come to fore. It seems that the OSCPCR chairperson is shielding the minister,” a leader of the BJP Mahila Morcha said.

She also asked as to what steps are being taken by the OSCPCR towards the cases of missing of minor girls in the state.

On the other hand, many Congress workers led by senior leaders Pradeep Majhi and Bijayalaxmi Sahoo staged protest in front of the office over the issue of the death of the minor girl.

Two from UP, 1 from Haryana arrested for Ganja smuggling in Odisha