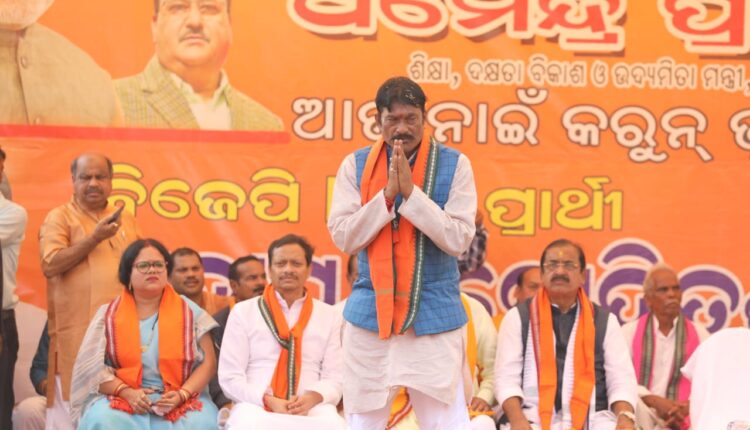 Bargarh: A day before the Padampur bypoll, BJP’s candidate Pradip Purohit staged dharna in front of the police station last night demanding action against a journalist who allegedly misbehaved with the leader of the saffron party.

He withdrew the dharna at around 2 AM after the local SDPO and other police officials assured him of action against the accused.

“After completion of the election campaigning, I had gone to the Laxmi Temple at Barihapali to have darshan of the deity, last evening. Around 100-150 villagers arrived at the temple after knowing about my visit and gave me blessing for my victory in the bypoll. In the meantime, a journalist of a news channel reached the spot and accused me of violating the model code of conduct saying that I was campaigning after the stipulated time,” said Purohit.

“I told the journalist that I was not campaigning as there were no supporters of BJP at the place. When he asked me about the gathering of people, I clarified that they came voluntarily. Shockingly, the journalist then intercepted me by holding my hand and asked me the same question repeatedly,” the BJP leader said, adding that the locals opposed the act of the media person.

“I later came to know that the journalist misbehaved with the villagers after I left the temple. He also threatened the locals saying that he belongs to a ‘Sarkari Channel’. I have never seen such kind of journalism. I strongly condemn his act,” Purohit added.