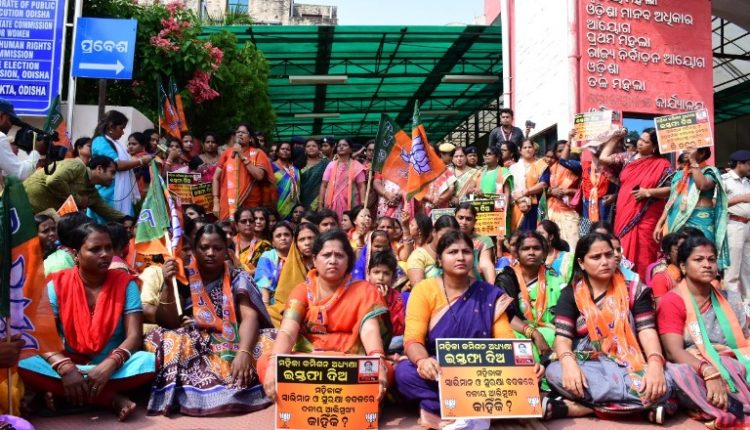 Bhubaneswar: Alleging that the Chairperson of Odisha State Commission for Women Minati Behera did not carry out an impartial probe into VLW Smitarani Biswal’s death case, BJP Mahila Morcha today gheraoed the office of the Commission and demanded Behera’s resignation.

Hundreds of members of the Morcha led by its president Pravati Parida also demanded that the Commission chairperson must make the probe report public. Parida further stated the Commission has tried to mislead the people of the State as its chairperson has neither met family members of Smitarani nor undertook on the spot verification.

The Commission chairperson is lying by saying that she had visited Jajpur on October 19 to probe the VLW death case, Parida alleged.

“If the Commission had undertaken an impartial probe, let her make the finding public. We demand a CBI probe into the case and action against Jajpur SP for tarnishing the character of Smitarani,” said Parida, adding that the BJP Mahila Morcha will intensify its agitation across the State in coming days if the Commission chairperson does not resign from the post.

In her reaction, the Commission Chairperson said there is no truth in the allegations of Opposition parties. A five-member team has probed the woman VLW death case from all possible angles and no partiality has been done during the investigation, she added.

“As the Commission is not happy with the police investigation, it has recommended the State government for a Crime Branch probe,” Behera said.