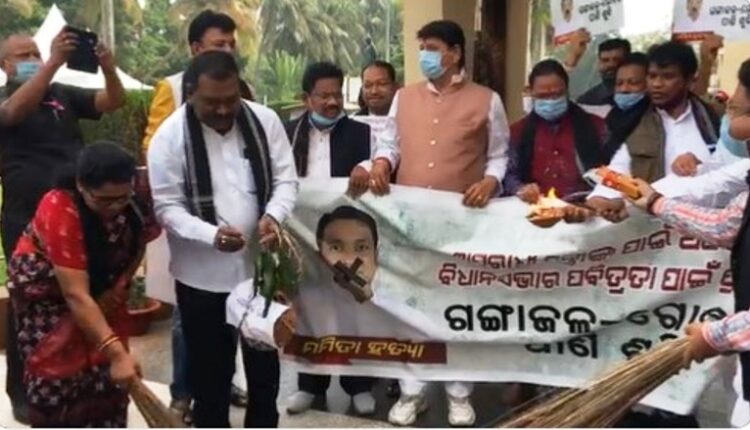 Bhubaneswar: Protests by members of opposition parties over schoolteacher Mamita Meher murder case continued to stall proceedings of Odisha Assembly on the third day of the Winter Session today.

Claiming that entry of Minister of State (Home) Dibya Shankar Mishra has desecrated the state Assembly, a group of BJP legislators ‘consecrated’ the House by sweeping and sprinkling Gangajal (the holy water) and cow-dunk water on the premises.

“Instead of coming for a discussion, they are making propaganda over different issues to stage protest disrupting the House proceedings. If the din continues, the Speaker will take step to restore normalcy in the House,” she said.

Members of both BJP and Congress have been protesting against the Minister since the first day of Winter Session for his alleged link with Govind Sahu, the prime accused in Mamita Meher murder case, forcing the Speaker for repeated adjournments.

On the first day, Congress MLAs led by Mohammed Moquim and Santosh Singh Saluja sat on dharna at two entrances of Assembly in a bid to prevent the Minister from entering the House. Shouting slogans and holding placards that read “Go back MoS (Home)” and “Give Justice to Mamita Meher”, the legislators demanded an answer from Chief Minister Naveen Patnaik over the issue.