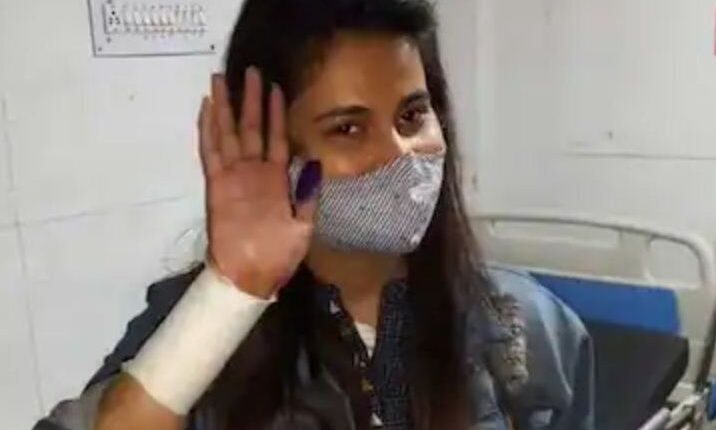 Ankita has been admitted to the Civil hospital in Lucknow where her condition is said to be stable.

According to reports, before slitting her wrists, Ankita posted two videos on social media in which she said that she was ending her life.

In the video, Ankita said that ‘her husband Ayush, MP Kaushal Kishore, her MLA mother-in-law Jai Devi and Ayush’s brother were responsible for her death. She said that Ayush had betrayed her’.

Ankita is seen crying in the video and making serious allegations against the MP’s son and her husband Ayush. She said that she was hoping that her husband would come to her but he did not.

Sources said that Ankita, late on Sunday night, went to the house of the BJP MP and slit her wrist.

She was rushed to the civil hospital immediately. Female policemen have been deployed for the safety and surveillance at the hospital.

It may be recalled that Ayush had a love marriage with Ankita last year. The family members were not happy with his marriage. Ayush was living in a rented house in Lucknow’s Mandiaon mohalla with his wife.

On March 3, Ayush suffered gunshot injuries and the police, after investigation, said that he had staged the attack on him.

Ayush went missing from the hospital and appeared before the Mandiaon police on Sunday to record his statement.

Kaushal Kishore is an MP from the Mohanlalganj Lok Sabha seat.