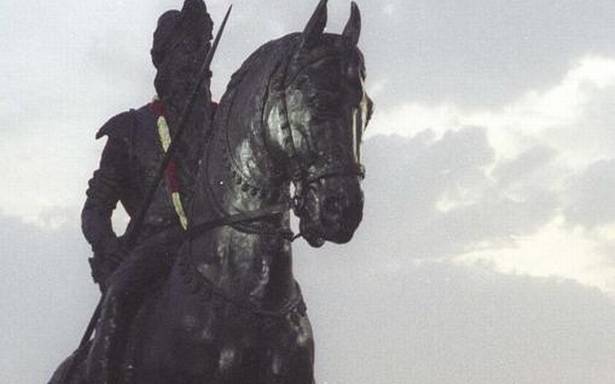 New Delhi: Hundreds of BJP workers on Wednesday staged a protest near Pakistan High Commission here against vandalisation of a statue of Maharaja Ranjit Singh in Lahore.

The BJP workers gathered at Teen Murti area and marched towards Pakistan High Commission, however, Police stopped them before reaching the High Commission.

BJP Delhi Yuva Morcha president Vasu Rukhar told IANS that the Pakistan government must apologise and install a grand statue of Maharaja Ranjit Singh where it was demolished in Lahore.

“We are demanding not just an apology from Pakistan Prime Minister Imran Khan but also demanding for his assurance and arrangements to stop the persecution of minorities especially of Hindus and Sikhs and desecration of their shrines and idols,” Rukhar said.

As per reports, a member of Tehreek-e-Labbaik Pakistan, a radical group, vandalised the statue of Maharaja Ranjit Singh located within the Labore Fort Complex. A man responsible for vandalisation of the statue was detained by the local police.

It is learnt that this was for the third time the statue was vandalised since it was unveiled in 2019. The statue was unveiled on 180th death anniversary of Ranjit Singh, the first Maharaja of the Sikh empire who ruled Punjab.

India has expressed concern over vandalisation of statues and said that such attacks are creating a climate of fear among minority communities in Pakistan.

US freezes $9.5 bn Afghan money to bar access to Taliban