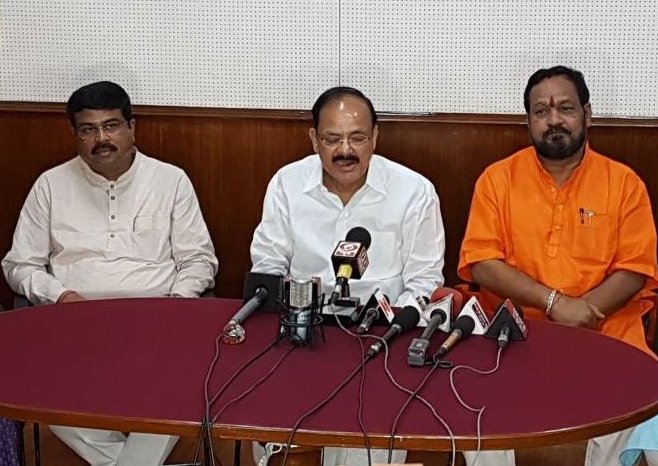 Bhubaneswar: Union Minister M. Venkaiah Naidu on Monday said the the National Democratic Alliance will reach out to various political parties to ensure unanimity on the next President of India.

“We want the next President to be elected unanimously. We will reach out to various parties for a consensus candidate,” the Urban Development and Information and Broadcasting Minister said here.

He said the NDA is not averse to talk with the Biju Janata Dal (BJD) of Odisha on this count.

Naidu was in the Odisha capital to attend a ‘Sabka Saath Sabka Vikas’ event, held in connection with completion of the Narendra Modi government’s three years in office at the Centre.

The Bharatiya Janata Party, the leading party in the ruling NDA, has set u a three-member panel comprising Union Ministers Rajnath Singh, Arun Jaitley and Naidu for the presidential election scheduled for July 17.

Naidu attacked the Congress, saying it is focusing on 3Ds of “disrupt, disinform, and defame”.

“The prime work of the Congress is to defame Prime Minister Narendra Modi, who is always working for the nation’s development, disrupt Parliament over petty issues, and disturb people by spreading false information on central government schemes,” the Minister said.

He said the central government was focusing on 3Ds — decisiveness, dynamism, and development. (IANS)

+2 cut off marks out; Ravenshaw college highest in Science stream