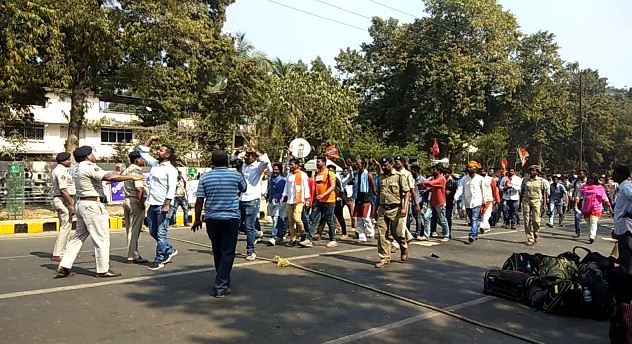 Protesting the alleged failure on the part of the Odisha Government in creating jobs in the state, members of the youth wing of the BJP carried out a rally to gherao the Odisha Assembly.

However, they were stopped by police at Lower PMG here, following which a scuffle ensued between them and the cops as the BJYM activists tried to go past the barricades by breaking it.

Later, eggs and tomatoes were hurled at the police by the agitators, reports said.

“While over 22 lakh youth have registered themselves with the employment exchanges in the state since 2009, the state government provided employment to only 26,000 youth in the last 10 years,” said Tankadhar Tripathy, Odisha BJYM president.

“The state government had taken Rs 100 from about 40,000 candidates to hold a job fair. But, it failed to conduct the fair and return the money. The government has looted the youth.”

The ruling party had promised to set up a Chief Minister’s Employment Generation Scheme under which a minimum of 150 youth from each gram panchayat will be imparted necessary skill training besides providing loan and subsidy linkage to them.

Reacting to the protest, the Biju Janata Dal (BJD) said the saffron party has no right to speak on employment.

“Prime Minister Narendra Modi had promised to provide two crore employment every year. Where is the employment? They have betrayed the youth and the country,” said BJD MLA Puspendra Singhdeo.