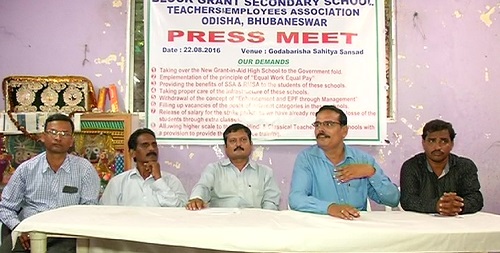 Block Grant Sikshyak O Karmachari Sangh today announced to hold a rally and dharna in front of the Odisha Assembly on September 8 to press on their nine-point charter of demands.

The Sangh made the announcement at a press conference here today.

Teachers and employees of 2608 newly aided and 167 unaided high schools will be taking part in the agitation, the Sangh said.

The Sangh has called for the agitation in support of their nine-point charter of demands which include taking over of all aided schools by the government, equal wage for equal work, benefits of Sarvasikshya and Madhyamik Sikshya Abhiyans, augmenting of infrastructure in schools and filling up of vacancies of teachers and employees.

The Sangh has threatened that if their demands are not fulfilled over 30,000 teachers and employees and their family members will boycott the forthcoming panchayat polls.