Blot on khaki: Cop nabbed while taking ‘hafta’ in Odisha 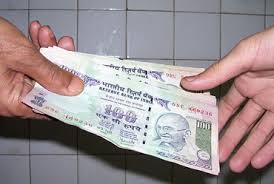 Bhubaneswar: A police personnel was apprehended today while taking ‘hafta’ from a businessman on Odisha capital outskirts.

As per Vigilance sources, the ASI of Police posted at Odisha Engineering College (OEC) Outpost has been trapped by the sleuths from Bhubaneswar Division accepting a bribe of Rs 2, 000 from a complainant Prasant Kumar Khatei of Jamukoli village under Air Field police limits.

The accused Krushna Chandra Das had demanded Rs 3, 000 from Khatei – who runs a tractor for commercial purpose – as monthly ‘hafta’ with an assurance not to register any case under Motor Vehicle Act. The deal was finalised at Rs 2, 000 per month.

Following this, Khatei had reported the matter to SP, Vigilance (Bhubaneswar) and a laid was trapped today.

The policeman was arrested and the bribe money recovered from him.

Odisha man gets 10-year RI for raping deaf and mute