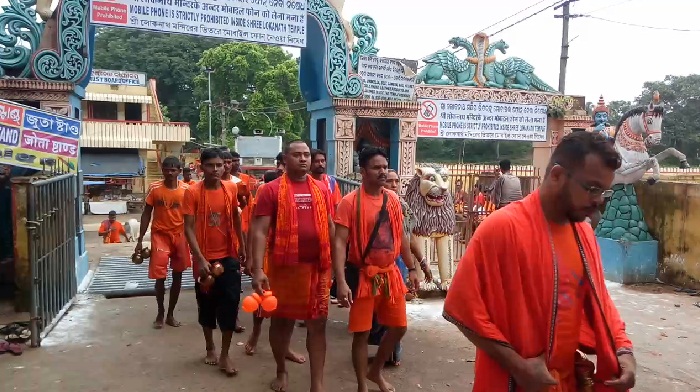 Bhubaneswar: Thousands of Kanwariyas today waited in long queues to offer holy water to Lord Shiva at temples across Odisha on the occasion of first Monday of Hindu month Shraavana.

The Bol Bam devotees, dressed in saffron-coloured clothes, started their journey in groups after picking up water in small pots from various rivers in order to offer it to the deity.

Security arrangements were made at major Lord Shiva temples in the state including the Lingaraja Temple in Bhubaneswar, Lokanath Temple in Puri and Akhandalamani Temple in Bhadrak in view of the gathering of the devotees.

In view of influx of kanwariyas to the centuries old Lingaraj Temple in Bhubaneswar, the temple administration has made special arrangements for the devotees.

The ASI has erected barricades inside and outside the shrine for the kanwariyas. A long pipe made up of copper has been installed near Ada Katha where the kanwariyas in queue will pour the holy water into the pipe. The water will move through the pipe and fall upon the Shakti of Lord Shiva.