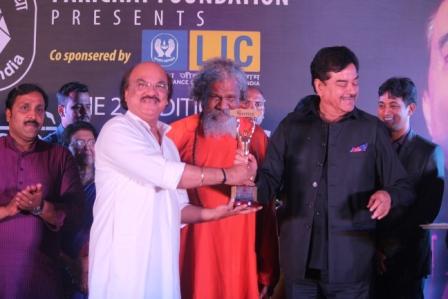 Bhubaneswar: Actor-turned-politician Shatrughan Sinha this evening graced the second edition of Parichay Foundation as the chief guest and gave away the awards to all men achievers, chosen from different fields.

Shatrughan Sinha, was all praise of the exemplary work being done by the foundation to bring about a difference in the lives of underprivileged women and children and also appreciated the initiative taken up by Parichay to felicitate men achievers.

Parichay Foundation, which has been engaged in the promotion of Indian art and culture and bringing about economic and social upliftment of underprivileged women and children in urban slums of Odisha and Delhi for the last ten years.

While Aarya Awards, one of its signature events has been felicitating women achievers from different fields for the last five years, Shrie Awards, launched in 2016, acknowledges the achievements of men in various sectors in a bid to encourage their contribution to the society. While the foundation believes in empowerment of women, it also wants to recognise the role played by men for a better society.

Founder, Parichay Foundation, Rosalin Patasani Mishra said, “Parichay has always made an attempt to give a new identity to Odia achievers, both men and women from across the country and outside, who have been quietly doing good work in various fields which in turn has had a positive impact on the society. Of course, we also have awards being given away to very eminent and established achievers. The idea is to appreciate good work on one platform, be it on a smaller or a larger scale.”

That apart, in sync with its objective to promote art and culture, the second edition of Shrie Awards also saw Padmashree Illeana Citaristi and Sangeet Ratna Saswat Joshi perform together besides a soulful performance based on Fathers’ Day by playback singer and Indian Idol 6 contestant Amrita Bharati Panda.