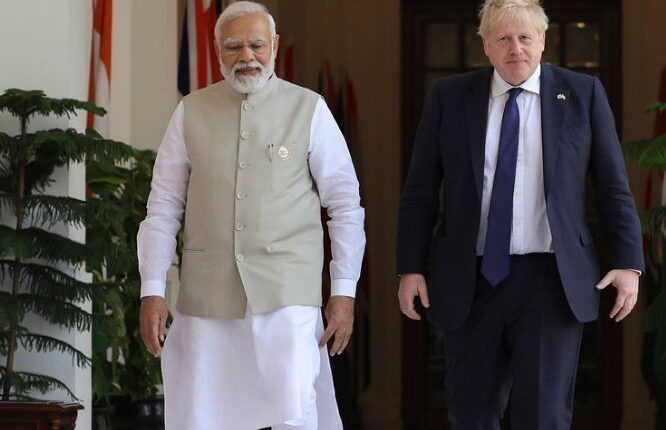 New Delhi: With an eye on Russia, British Prime Minister Boris Johnson on Friday offered help to India giving ‘know-how’ for making its own fighter jets and a licence for faster deliveries of defence equipment, especially when the West is trying to wean India away from Russia.

During bilateral talks with his Indian counterpart Narendra Modi, Johnson discussed the ways to boost trade and security ties with India, which buys more than half of its military hardware from Russia.

Both leaders agreed to transform defence and security cooperation as a key element of India-UK Comprehensive Strategic Partnership and discussed opportunities for defence collaboration including co-development and co-production for meeting the needs of armed forces of both the countries.

The two leaders had also detailed discussion on co-production and defence technology, particularly in electric propulsion and modern defence aircraft’s jet engines and other complex defence equipment, the Ministry of External Affairs said in a statement.

They also agreed to closely cooperate on countering the persistent threat of terrorism and radical extremism.

Prime Minister Modi also expressed deep concern at the mounting humanitarian crisis and reiterated his call for immediate cessation of violence and return to direct dialogue and diplomacy as the only way forward.

“The world faces growing threats from autocratic states which seek to undermine democracy, choke off free and fair trade and trample on sovereignty,” Johnson said in a statement on Thursday after visiting Gujarat.