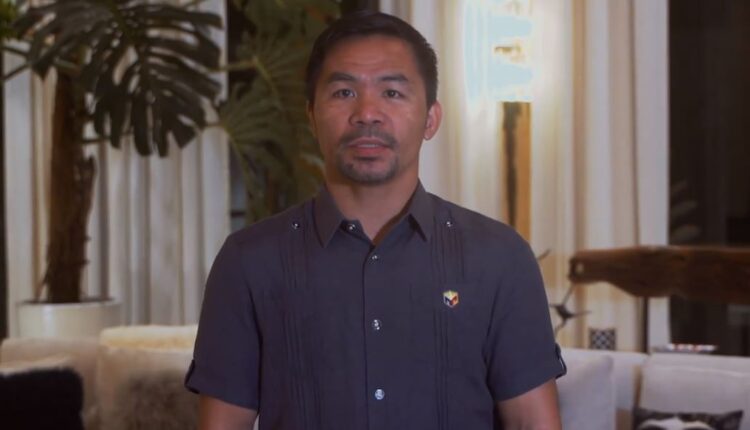 Manila: Filipino world boxing icon and Senator Manny Pacquiao on Friday officially filed his certificate of candidacy for the May 2022 presidential elections.

Pacquiao, 42, is the first presidential aspirant to file his candidacy as the Commission of Elections opens the filing for politicians who plan to run, reports Xinhua news agency.

He arrived at the commission’s office on board a bus with the Filipino slogan loosely translated to “a son of poor parents” with his wife Jinkee and running mate, House Deputy Speaker Lito Atienza.

“My decision to run for President is not just for my family or me but the country as well. I want to give Filipinos a bright future,” he told reporters after filing his certificate of candidacy.

Pacquiao said his candidacy hinges on stamping out corruption and improving the economy to alleviate the plight of poor Filipinos.

He vowed to jail corrupt officials if elected president.

On Wednesday, Pacquiao announced that he was retiring from boxing to pursue the presidency.

Pacquiao earned the distinction as the only fighter to win 12 major titles in eight weight classes as a boxer. He is the first fighter to win the lineal championship in five different weight divisions.

On September 19, Pacquiao officially accepted the nomination to be the standard-bearer of the PDP-Laban faction.

The other faction endorsed Senator Christopher Go and President Rodrigo Duterte as their presidential and vice-presidential candidates respectively.

Duterte, whose single six-year term ends in June next year, has accepted the nomination, but Go did not.

He is yet to file his certificate of candidacy.

The May 2022 elections will elect the President, Vice President, half of the 24-member Senate, members of the House of Representatives, and other local officials.

The filing of the certificates of candidacy for all candidates opened on Friday until October 8.