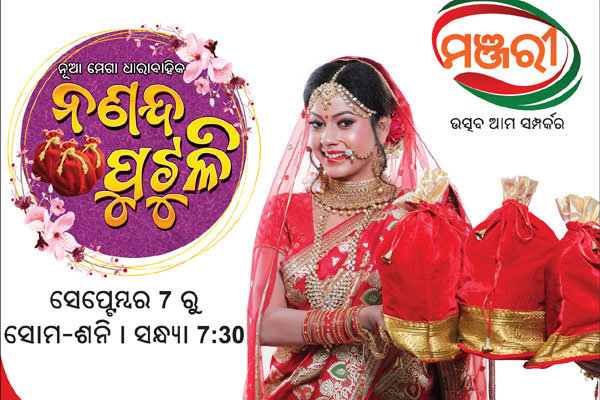 Bhubaneswar: Primetime in your households is soon going to have a new flavour as Manjari TV brings a new show ‘Nanand Putuli.’ The show will start on September 7 and will be aired from Monday to Saturday, 7:30 pm onwards on the first free-to-air entertainment channel in Odisha.

‘Nanand Putuli’ is a family comic-drama whose plot opens with the main protagonist Priyanshu’s family of mother Prabina and three unmarried sisters. After his father’s demise, Priyanshu becomes the breadwinner for the family. But, another integral part of his life is his lady-love Flora, an obstinate woman who wants to take their relationship to the next level.

What makes Priyanshu’s life tough is that all his sisters have a long list of excuses to refrain from getting hitched and until they do, the poor man of the house has to wait for his turn for a dream-wedding with his lady-love.

The story gets a new twist as Priyanshu’s colleague Prapti offers to help him fix the problem. As the duo set out on the mission to put things into places, new relationships of faith and affection develop between them. Does that change Priyanshu’s relationship with Flora? Do the sisters nod for the wedding-knot? What’s in store next!

To find out, switch to Manjari TV at 7:30 pm starting from September 7.