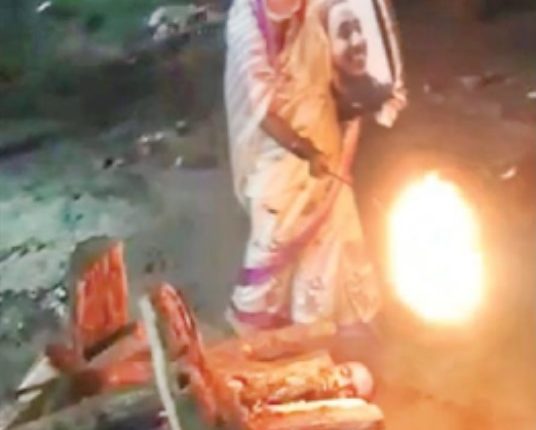 Bhubaneswar: Destiny has its own way, but it can never conquer a woman with strong heart and mind even if she might have lost everything to time. Here’s tale of a braveheart who performed the last rites of her husband breaking the stereotype in society.

Amiyabala Parida, a lecturer by profession, who resides at an apartment in Patrapada area in Odisha capital, recently lit funeral pyre of her husband holding photograph of her dead son in one hand at a crematorium.

According to reports, Amiyabala and her husband Chandi Prasad Bagh had lost their only son Girija Prasad in a road mishap a year ago. Chandi Prasad, who was a former Indian Navy official, was paralysed for over seven years following a massive brain stroke. Against all odds, Amiyabala had dedicated her entire life to service of her ailing and bed-ridden husband. Even after death of her son last year, she was not broken, rather stood firm to face all difficulties.

After years long selfless service, she finally lost her husband on May 3. As the couple had no son, everyone expressed concern over performing last rites of Chandi Prasad as per Hindu tradition.

However, without making delay, Amiyabala came forward to perform all the rituals of her husband claiming that she was everything to her husband.

“Both my husband and son departed the world leaving me all alone. My son died last year and husband left for abode this year. Probably, it was God’s will. I was extremely anguished and could not control my tears, still I lit the funeral pyre holding a photograph of my dead son in one hand to fulfill my husband’s last wish,” said Amiyabala in a choked voice.

The couple’s son Girija had died in a road accident on May 25, 2019. A year after son’s death, Amiayabala lost her husband. Without son, the mourning woman managed everything single-handedly and performed last rites of her husband.

The heart-wrenching story may bring tears to many eyes, but the brave woman stands as an inspiration to all.

Even though, Amiyabala has been all alone now, but she has promised herself to keep her husband and son alive through her selfless work.

In memory of two beloved persons of her life, Amiyabala has set up two charitable trusts in name of her husband and son to contribute to various social services. After death of her son, she had started a charitable trust that is catering to road safety awareness programmes.