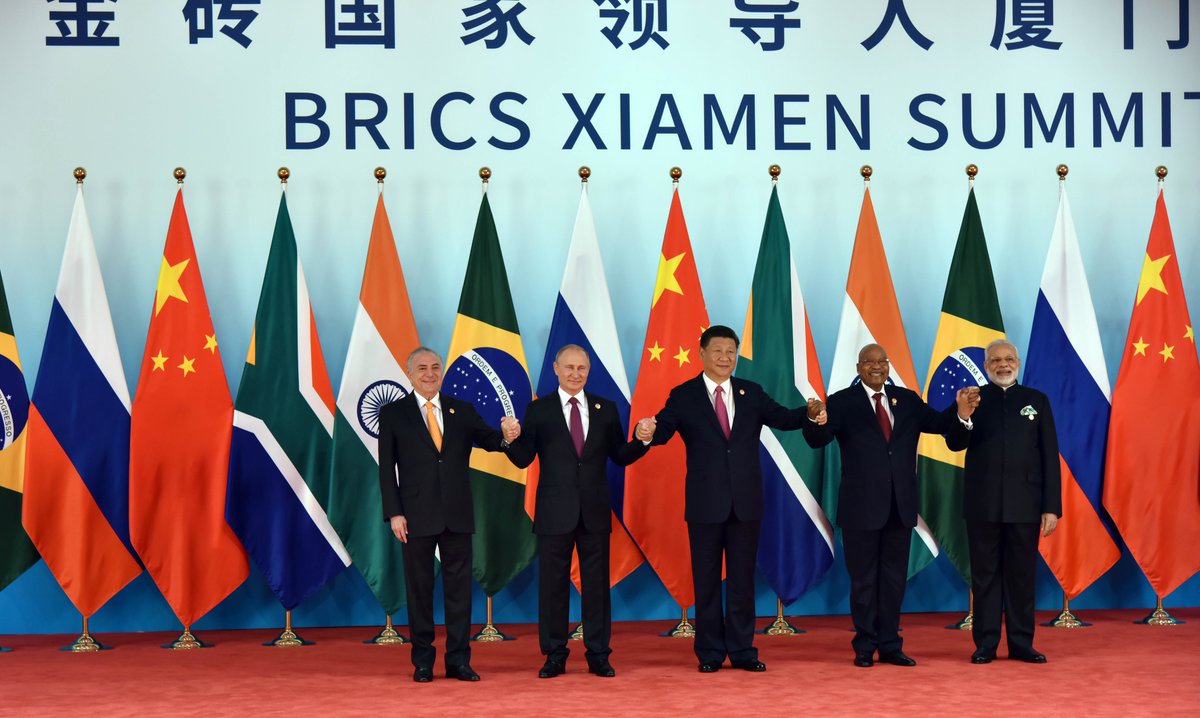 Xiamen (China): In a big win for India’s campaign against terrorism emanating from Pakistan, the BRICS countries on Monday named the Pakistan-based groups like Lashkar-e-Taiba (LeT) and Jaish-e-Mohammad (JeM) while calling for a comprehensive approach to combat terrorism.

Last year at the 8th BRICS Summit in Goa, China had reportedly opposed the inclusion of the Pakistan-backed terrorist outfits in the declaration.

“We express concern on the security situation in the region and violence caused by the Taliban, ISIL/DAISH, Al Qaeda and its affiliates including Eastern Turkistan Islamic Movement, Islamic Movement of Uzbekistan, the Haqqani network, Lashkar-e-Taiba, Jaish-e-Mohammad, TTP (Tehreek-i-Taliban Pakistan) and Hizb ut-Tahrir,” said the Xiamen declaration, adopted at the 9th BRICS Summit here.

The summit was attended by Prime Minister Narendra Modi and Presidents Xi Jinping of China, Vladimir Putin of Russia, Michel Temer of Brazil and Jacob Zuma of South Africa.

JeM chief Masood Azhar has been blamed for deadly cross-border terror attacks on Indian military establishments. India has moved the UN to declare Azhar an international terrorist but China has repeatedly put a hold on the proposal.

The LeT was held responsible for the 2008 Mumbai terror attack that left 166 Indians and foreigners dead.

The Xiamen declaration condemned terrorism in all its its forms and manifestations, saying there can be no justification whatsoever for any act of terrorism. And it deplored all terror attacks worldwide, including in BRICS countries.

Without naming Pakistan, the statement said: “We reaffirm that those responsible for committing, organising or supporting terrorist acts must be held accountable.

“Recalling the primary leading role and responsibility of states in preventing and countering terrorism, we stress the necessity to develop international cooperation, in accordance with the principles of international law, including that of sovereign equality of states and non-interference in their internal affairs.”

The BRICS countries backed the efforts of the Afghan security forces to defeat terrorism.

“We strongly condemn terrorist attacks resulting in death to innocent Afghan nationals. There is a need for immediate cessation of violence.

“We reaffirm our support to the people of Afghanistan in their efforts to achieve ‘Afghan-led and Afghan-owned’ peace and national reconciliation, to the ongoing international efforts…
We support the efforts of the Afghan… security Forces in fighting terrorist organisations.

“We call upon all nations to adopt a comprehensive approach in combating terrorism, which should include countering radicalization, recruitment, movement of terrorists including foreign terrorist fighters, blocking sources of financing terrorism including, for instance, through organised crime by means of money-laundering, supply of weapons, drug trafficking and other criminal activities, dismantling terrorist bases, and countering misuse of the internet including social media by terrorist entities through misuse of the latest Information and Communication Technologies (ICTs).

The declaration urged the international community to establish a genuinely broad international counter-terrorism coalition and support the UN’s central coordinating role in this regard.

“We stress that the fight against terrorism must be conducted in accordance with international law, including the Charter of the UN, international refugee and humanitarian law, human rights and fundamental freedoms…

“We call for expeditious finalization and adoption of the Comprehensive Convention on International Terrorism (CCIT) by the UN General Assembly.” (IANS)