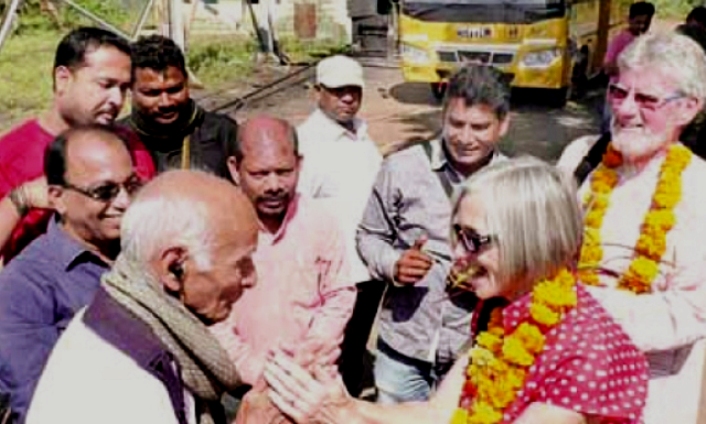 Koraput: Usually, foreigners pay a visit to Koraput, the southern region of Odisha, to enjoy serenity. But, a very few gets rousing welcome from the locals for their close connection with the tribal district.

Briton couple Richard Gold and Jenifer visited the Nature-packed place after six decades not to click its beauty, but to recall nostalgic memories of their childhood days .

According to reports, the British couple’s parents had immense contribution to mega Machkund project, which had started before India’s Independence.

The British government had hired a host of skilled engineers from London and Germany for completion of the hydroelectric power plant in Koraput district.

Reports said that Chief Engineer George Gold, father of Richard; and Assistant Engineer Rubber Neugold, father of Jenifer, from London were among the team of engineers for the project. Along with their families, the two engineers reached Machkund in the year 1950.

Both Richard and Jenifer were only 4-5 years old when they temporarily shifted to Odisha with their families. After spending few years, they went back to their country with beautiful memories.

As the two children grew together, they chose each other to live together and tied the knot.

The couple recently visited Odisha after a long gap of 69 years. The stories about Koraput, filled with shrubs, mountains, streams and blessed with divine beauty of Nature, told by their parents, refreshed their childhood memories.

They were overwhelmed to see the place and meeting villagers. They shared their stories and photographs with the locals. The duo also videographed Koraput’s beauty and told the villagers to show it to their relatives in London.