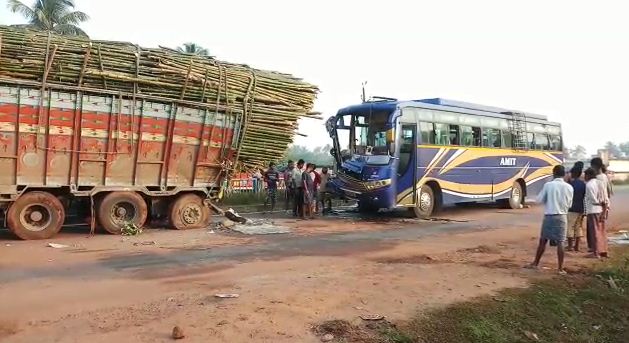 Bhadrak: A bus with around 60 pilgrims on board hit a truck from rear on NH-16 near Charampa in Odisha’s Bhadrak district late last night killing at least two persons and leaving 15 others injured.

According to reports, the ill-fated bus, which was carrying the pilgrims from Uttar Pradesh to Puri, rammed into a stationary bamboo-laden truck from backside around 2.30 AM.

The driver of the bus and a passenger died on the spot under the impact of the collision. The deceased have been identified as Ram Sagar Yadav, the driver, and Shib Narayan Mishra, a passenger.

On being informed about the mishap, police reached the spot, rescued the injured ones and admitted them to the Bhadrak District Headquarters Hospital.

Odisha: Criminal accused in over 60 cases injured in police encounter