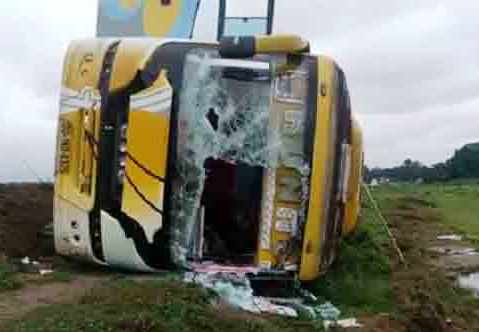 Angul: A bus overturned on NH-55 near Nakachi in Odisha’s Angul district today. Luckily, all passengers inside the vehicle escaped unhurt.

The ill-fated bus was on the way to Sambalpur from Bhubaneswar when the driver of the vehicle lost control over the wheels early this morning, following which it skidded off the road and turned turtle.

Bus falls off bridge in Odisha’s Kandhamal; over 30…

The passengers of the bus were reportedly safe. On the other hand, the driver absconded after the road mishap.

Police have seized the bus and started investigation into the matter. Preliminary probe revealed the incident took place due to negligence on the part of the driver, police sources said.