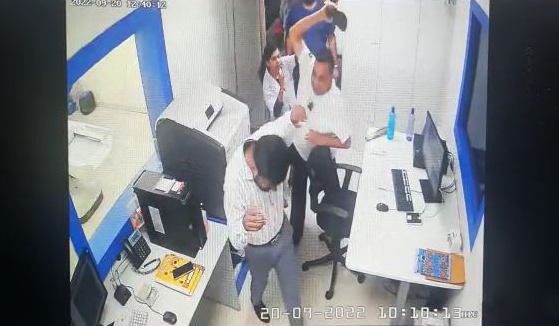 Sambalpur: A doctor was allegedly beaten with chappal in a private diagnostic center of Sambalpur town for unusual delay in CT-scan, today. However, the incident has been captured in CCTV.

The doctor named Chidananda Mishra lodged an FIR at Town police station in this connection against the accused identified as Natabar Banka. He is a businessman by occupation.

Acting on the FIR, local police launched a probe and verified the video footage of a CCTV installed in the doctor’s room. Police have detained the man for assaulting the medico, a senior official said.

According to police sources, accused Natabar had been to the diagnostic centre located in the town for his health check-up. He was advised a CT-scan by the radiologist following which he waited on queue. Later, he approached the radiologist Mishra to perform his testing at the earliest, but to no avail.

Things turned ugly when, in a fit of rage, the accused businessman beat the doctor with chappal.