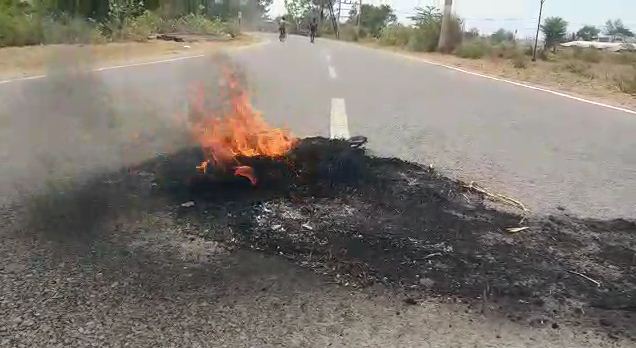 Berhampur: Tension ran high at Hansapur under Chhatrapur police limits in Odisha’s Ganjam district today as locals, who were staging protest over the murder of a businessman and subsequent suicide of his fiancé, allegedly attacked policemen.

According to reports, the villagers had staged road blockade by burning tyres with a demand of arrest of murderers of cement trader Krushna Chandra Parida.

As police personnel reached the spot to pacify the protesters and take the situation under control, the locals pelted stones at the cops. The villagers also ransacked the vehicle of the police.

The irate agitators snatched the camera and mobile phones of the mediapersons, who had gone to the place to cover the incident.

Worth mentioning, the businessman was allegedly thrashed to death by miscreants near Hansapur on April 22 night. Being grieved over the death, his would-be wife took the extreme step of ending her life as she consumed poison during the protest.

She was rescued and rushed to the MKCG Medical College and Hospital, where she breathed her last during treatment.

Odisha GRS with Rs 8,500 salary found having assets worth crores including 59 plots