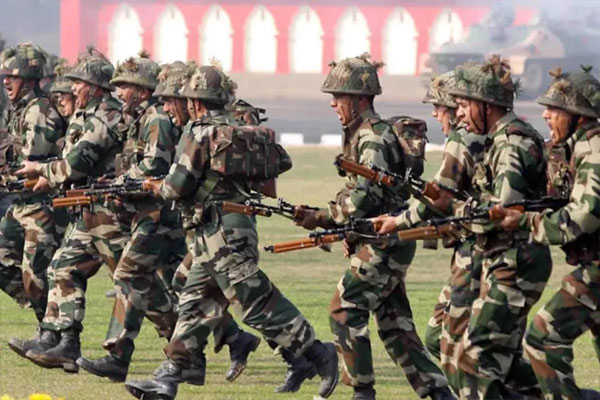 New Delhi: Defence Minister Rajnath Singh on Tuesday announced that the Union Cabinet has approved a recruitment scheme for Indian youth to serve in the Armed Forces.

The scheme is called ‘Agnipath’ and the youth selected under this scheme will be known as ‘Agniveers’. About 46,000 of them will be recruited this year.

Singh said that scheme is a transformative initiative and under it Indian youngsters will get an opportunity to serve in armed forces. “The scheme will increase employment opportunities and aim to create a youthful profile of the Armed forces,” Singh said.

“The ‘Agniveers’ will be given a good pay package and an exit retirement package after four years of service,” Singh said.

The scheme will lead to a much more youthful and technically adept war fighting force by ensuring a fine balance between youthful and experienced personnel in the Armed Forces.

Also, it will bring a transformative reform of recruitment policy of the Armed Forces and provide a unique opportunity to the youth to serve the country and contribute to nation building.

It is envisaged that average age profile of Indian Armed forces would come down by about four-five years by implementation of this scheme and the nation stands to immensely benefit by infusion of highly inspired youth with deeper understanding of self-discipline, diligence and focus who would be adequately skilled and will be able to contribute in other sectors.

The benefits of a short military service to the nation, society and the youth of the nation are immense. This includes inculcation of patriotism, team work, enhancement of physical fitness, ingrained loyalty for the country and availability of trained personnel to boost national security in times of external threats, internal threats and natural disasters.

‘Agniveers’ will be offered a salary package of Rs 4.76 lakh in the first year which goes up to Rs 6.92 lakh in the fourth and final year.

The ‘Seva Nidhi’ will be exempted from Income Tax. There shall be no entitlement to gratuity and pensionary benefits. ‘Agniveers’ will be provided non-contributory Life Insurance Cover of Rs 48 lakh for the duration of their engagement period in the Indian Armed Forces.

During this four years period of service to the nation, the ‘Agniveers’ will be imparted with various military skills and experience, discipline, physical fitness, leadership qualities, courage and patriotism.

Post this stint of four years, they will be infused into the civil society where they can contribute immensely towards the nation building process. The skills gained by each ‘Agniveer’ will be recognised in a certificate to form part of his unique resume. Moreover, the ‘Seva Nidhi’ of approximately Rs 11.71 lakh would aid the Agniveer to pursue his or her future dreams without the financial pressure, which is normally the case for young people from the financially deprived strata of society.

The individuals, selected for enrolment in the Armed Forces as regular cadre, would be required to serve for a further engagement period of minimum 15 years and would be governed by the existing terms and conditions of service of Junior Commissioned Officers/Other Ranks in Indian Army and their equivalent in Indian Navy and Indian Air Force and that of Non Combatant enrolled in the Indian Air Force, as amended from time-to-time.

Enrolment will be based on ‘All India All Class’ basis and the eligible age will be in range from 17.5 to 21 years. ‘Agniveers’ will meet the medical eligibility conditions laid down for enrolment in the armed forces as applicable to respective categories/trades. The educational qualification for ‘Agniveers’ will remain in vogue for enrollment in various categories like for entry into General Duty (GD) soldier, the educational qualification is Class 10.

Respite in sight! Rain to lash parts of over 20 Odisha districts for next 5 days