Caliphate Opposed To Shia Apostasy And, Eventually To Sunni Monarchies 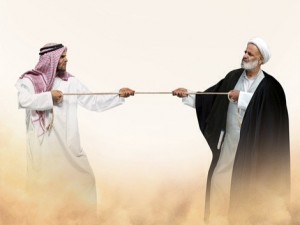 The expanding Shia-Sunni conflict in the Muslim world is exposing vast gaps in popular understanding of the schism.

For example when Zine El Abedine Ben Ali, the Tunisian strongman was ousted, people thought a Shia dictator had fallen. From this they extrapolated that the Arab Spring was an anti-Shia plot.

Why would such a misunderstanding arise? Because Zine El Abedine happens to be a very typical Shia name in large parts of the world. The suffix to his name, Ben Ali, makes the name sound that much more Shia because the basic division between the sects centres on the personality of Ali, the Prophet’s cousin and son-in-law. Shias are “partisans” of Ali in this dispute.

A Sunni, with a Shia ring to his name is explained by a simple historical detail: the Fatimids ruled large parts of North Africa and Mediterranean enclaves from 909 AD to 1171 AD. They even ruled Sicily. The main church in Palermo, capital of Sicily, has a column with Quranic inscriptions which have been preserved as a tourist attraction. For two hundred years Moharram processions, a patently Shia observance, were mandatory on Palermo’s main roads.

Al Azhar University in Cairo derives its name from Fatima Zehra, the Prophet’s daughter. The late Sid Ahmad one of the left leaning intellectuals in Cairo with a regular Salon on the Nile described sophisticated Egyptians with a telling phrase: “Sunna bil Deen; Shia bil Hawa.” Which means: “Our faith is Sunni but our hearts are Shia” all traced to the Fatimid spell.

This kind of cultural confusion is widespread. There are a large number of Muslims who are born Sunni but respect “ahle bait” or members of the Prophet’s family a notch above others. All the Sufi schools in India, for instance, fall in this category. Khwaja Moinuddin Chishti Ajmeri’s famous quartrain in praise of Imam Hussain is cited as evidence of this streak.

The Sufis came to India from Central Asia which had retained cultural and spiritual strands from the days of the Persian Empire.

They had spread out so wide in India that as early as the 15th century the great Sufi Malik Mohammad Jaisi was writing his great allegory Padmavat near Rae Bareli, making him the first great poet in Awadhi, preceding Tulsidas by decades.

Shia-Sunni equations remained blurred in many parts of the world because of the confluence of the streams with rapidly advancing Sufi mysticism. For instance the Fatimids left behind an ambiguous Islamic culture on this count in Morocco, Algeria, Tunisia, Libya, Sudan and the Levant.

For decades Syrian and Iraqi Islam had a heavy overlay of atheistic Baathism. Religion surfaced in a big way only after the US occupation of Iraq in April 2003. It became almost necessary for the US to encourage Shia power because they needed televised images of Iraqis celebrating Saddam Hussain’s fall.

Habitual Baathists could not overnight appear on the streets as pious Sunnis, denouncing the man they lived in awe of. During the 1992 Shia uprising in Karbala, brutally suppressed by Saddam Hussain, hundreds of thousands of “troublesome” Shias had been settled in a ghetto named Saddam city on the outskirts of Baghdad.

When crowds did not materialize on the streets of Baghdad to celebrate the televised pulling down of Saddam Hussain’s statue at Firdaus Square April 9, 2003, a request was placed with Shia leaders like Muqtada Sadr to mobilize celebrations. That is when the streets were filled with Shias from Saddam city to provide visual support to US success. Promptly Saddam city was renamed Sadr city.

Does it make sense that in 10 years of US occupation, Baathists first reverted to being devout Sunnis and have now mutated into the likes of Abu Bakr al Baghdadi, leading the faithful into the Sunni Caliphate, or the Islamic State of Iraq and Syria? Baghdadi belong to the virulent school of Ikhwan ul Muslimeen opposed to “Shia apostasy” as well as to “Sunni monarchies”.

The Caliphate appears to be a more recent idea which gestated during the brutal campaign in Syria which failed to affect a regime change in Damascus. The embarrassment of those who funneled support to the opposition against Bashar al Assad in Damascus is now enhanced by the durability of Nouri al Maliki in Baghdad. He tried and ousted the Sunni Vice President Tariq al Hashemi who was something of a Western favourite and for that reason suspected by the Iranians.

There are interests in the Syria-Iraq corridor who are under the control of their Western and Saudi sponsors. Aggravating the current situation is the fact that, with time, these controls are loosening. Additionally, a wide range of other Sunni groups who have suffered considerable status reversal, are clustering around an Abu Bakr al Baghdadi like figure, not because they want a Caliphate, but because they wish to weaken and oust Maliki in Baghdad and, if possible, Assad in Damascus.

It is worth noting that while mounting the brutal air and naval attacks against the Palestinians in Gaza, the Israelis are citing the “Caliphate” as the menace they fear Palestinians will eventually gang up with. There is no mention of Hezbullah and Iran.

*A senior commentator on political and diplomatic efforts, Saeed Naqvi can be reached on [email protected] The views expressed are personal-IANS

Odisha govt to conduct survey on child labourers this year