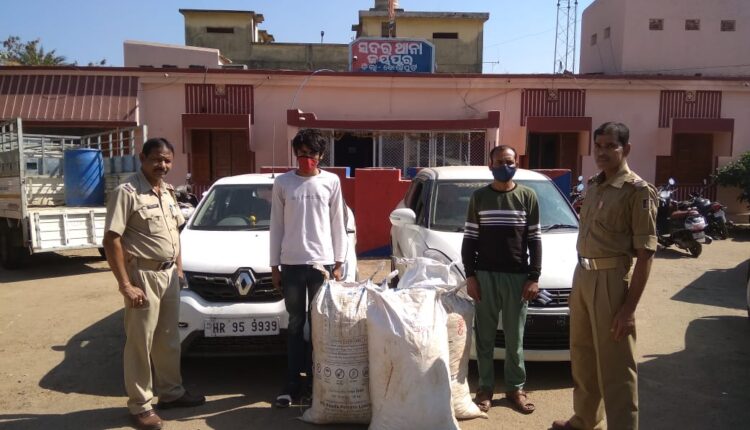 Acting on a tip-off, the Jeypore Sadar Police on December 5 evening intercepted two cars bearing registration numbers of Haryana and Madhya Pradesh in which the banned contraband was being transported to other states from Koraput district. The police apprehended two persons from the cars who were smuggling the ganja.

The accused duo has been identified as Sandeep Kumar (27) from Rohatak district of Haryana and Balbir Rana (38), a resident of Delhi.

The police also seized aadhaar cards of the accused persons, one RuPay card, one VISA card of Bank of Baroda, DL, one mobile phone and a pan card from their possessions.

Source said that the accused duo was smuggling ganja from Lamtaput in Koraput district to Haryana and Delhi.

In another incident, the STF detected an illegal trade of narcotic drugs on the state high way-326 near Limamode over bridge under Gunupur police limits in Rayagada district today.

One accused person identified as Ayubo Sabar of Sampen village under Nuagaon police limits was arrested in connection with the ganja smuggling.

A case has been registered under section 20(B)(II)(c)/29 of NDPS Act 1985 against the accused and the investigation is underway.

Nokia 3.4 to launch in India in mid-Dec: Report