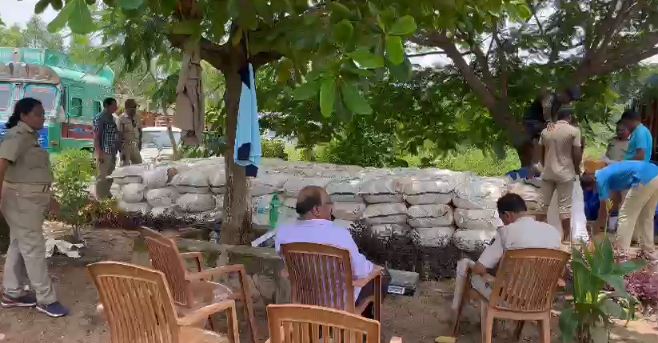 Rayagada: Excise department sleuths today claimed to have seized over 4,500 kg ganja worth around Rs 2.5 crore from a truck in Rayagada district.

The truck was reportedly transporting the contraband from Visakhapatnam to Delhi. The excise sleuths have seized the truck and arrested two persons in this connection.

On a tip-off, Excise Commissioner Ashish Kumar Singh had directed Rayagada district Excise Superintendent Abhiram Behera to intensify patrolling to track a truck that was transporting ganja from Visakhapatnam to Delhi.

The Excise department sleuths reportedly spotted the Delhi-bound truck bearing number CG13Y-5263 while patrolling on Rayagada bypass today morning. The driver of the truck allegedly sped away when the Excise sleuths approached the vehicle, sources added.

The sleuths chased the truck and intercepted it at Koraput Square and took Dinesh Kumar and Chandan Kumar, both residents of Sultanpuri area in Delhi, into custody.

During interrogation, the duo reportedly told the Excise sleuths that they were transporting rice husk for feeding cattle. However, the Excise sleuths led by Behera found as many as 136 packets of cannabis stuffed in the husk sacks, sources said.

“We have seized 4,572 kg ganja from the truck and arrested two persons in this connection. The arrested have been produced in a local court,” said an official of the Excise department.