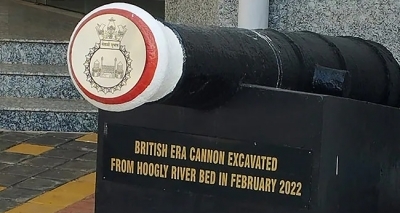 Kolkata: The Indian Navy may have dug up cannons nearly 250-year-old from the Hooghly riverbank in Kolkata. Two of these cannons are presently on display at INS Netaji Subhas, the Navy office in the city. Two more will be mounted soon while the fifth is still in the process of being dug out.

“We have acquired some land near Dahi Ghat in the city. While excavating the riverbank there, we found the five cannons. It is possible that a shipbuilding facility existed there. It seems that the cannons were meant to be mounted on ships. We have not yet sought expert advice but these could be of World War I vintage or older,” Captain Joydeep Chakraborty, Executive Officer, INS Netaji Subhas said.

According to experts on the subject, the cannons unearthed by the Navy predate World War I by at least a century. These are apparently from an era when armies and navies began standardising the dimensions and calibres of their artillery. The British seem to have begun this process in the early 18th Century.

“From the photographs published, it seems that the cannons are Armstrong Pattern ones. In 1725, John Armstrong, as British surveyor general of ordnance, developed a standard design cannon with specific dimensions. These cannons were robust without any decorations. Due to the specific dimensions, these cast iron 24-pounders could be built in any foundry,” one of the experts said.

In 1794, the Armstrong pattern was replaced by Blomefield Pattern guns. The cannons unearthed at Dahi Ghat could also be of this pattern. Only experts on the subject can determine this after closer scrutiny. A few years ago, two similar pieces of artillery were found on the Hooghly riverbank on Strand Bank Road. After a bit of restoration and a fresh coat of paint, they are now mounted outside the Jorabagan Police station in Kolkata.

But how did these cannons reach the Hooghly riverbank? Historians say that they may have been set up there for shore defences. Sometimes, when British ships berthed along the shore, they brought down the cannons mounted on board and placed them on shore or even buried them to be retrieved later as and when required. As it is, ships entering Calcutta had to deposit their gunpowder at the Barood Ghar or magazine near Moyapur, Budge Budge so the cannons would be of no use anyway.