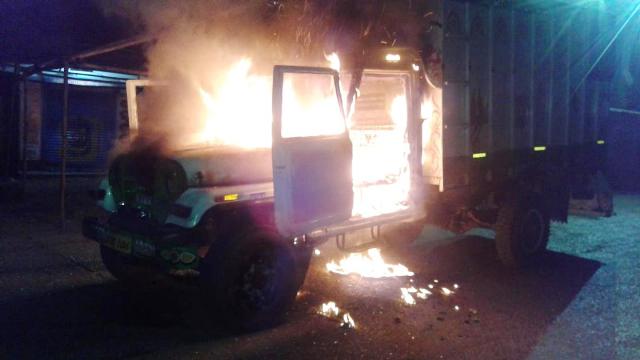 Bhadrak: Locals set a vehicle on fire and severely damaged seven others near Asurali Chhak in Odisha’s Bhadrak district late last night alleging that cattle smuggling was being carried out through these vehicles.

According to reports, as many as 180 cows were being transported from Kandharapatia village under Dhusuri police limits in the district to West Bengal in eight pickup vans. Locals detained the vehicles at Asurali around 2 AM and found that two cows had died of suffocation inside the vehicles.

They later freed the other cows and torched a vehicle besides ransacking seven other vehicles.

Policemen have been deployed at the spot to avoid any untoward situation as tension erupted at the place following the incident with locals resorting to road blockade demanding arrests of the pickup van drivers.