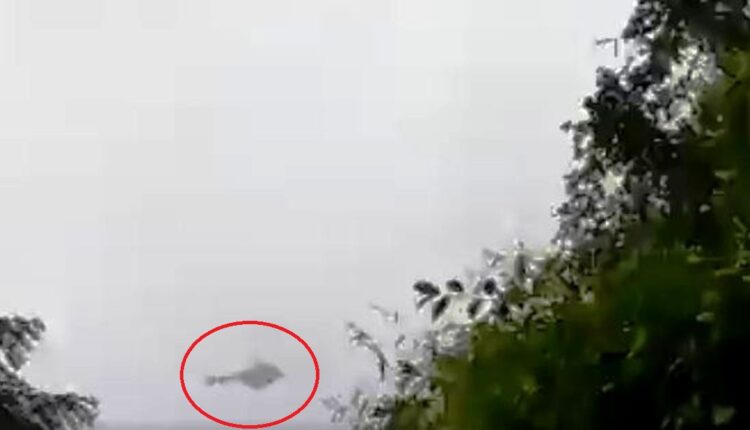 Bhubaneswar: A video of the final moments of the Mi-17 chopper carrying CDS Bipin Rawat and 13 others, which crashed in Tamil Nadu’s Coonoor yesterday, has surfaced.

The clip was recorded by locals present near the accident spot.

#WATCH | Final moments of Mi-17 chopper carrying CDS Bipin Rawat and 13 others before it crashed near Coonoor, Tamil Nadu yesterday

Gen Rawat was on a visit to the Defence Services Staff College at Wellington in Nilgiri Hills to address the faculty and student officers of the staff course.

Around noon on Wednesday, an IAF Mi17V5 helicopter with a crew of four members carrying the CDS and nine others met with the tragic accident near Coonoor.

Out of the 14 people, Group Captain Varun Singh, Directing Staff at the Defence Services Staff College, is currently undergoing treatment at the Military Hospital in Wellington.

Apart from them, two pilots, a Group Captain and a gunner were onboard the ill-fated chopper.

Singh, along with his wife and seven staff, boarded a flight at Delhi for the Sulur IAF base near Coimbatore at 8:47. They landed in Sulur at 11:34 am. From there, they boarded the Mi17V5 helicopter at 11:48. At 12:22 pm, the Air Traffic Control (ATC) lost contact with the chopper, which crashed in a forest area around 7 km from Coonoor.

The IAF said a Court of Inquiry has been ordered into the accident. The report is expected in one month.

The mortal remains of all the deceased will be brought to Delhi on Thursday.

General Rawat, 63, took charge as India’s first Chief of Defence Staff on January 1, 2020. The position was created to integrate the three services — Army, Navy and Air Force. The CDS is mandated to facilitate integration, ensure best economical use of resources allocated to the armed forces and bring uniformity in the procurement procedure.

Later, he was also appointed as the head of the newly-created Department of Military Affairs.

On December 17, 2016, the government had appointed him as the 27th Chief of the Army Staff. He took charge on December 31, 2016, after the retirement of General Dalbir Singh Suhag.

General Rawat was also the Principal Military Advisor to the Defence Minister on all tri-services matters.