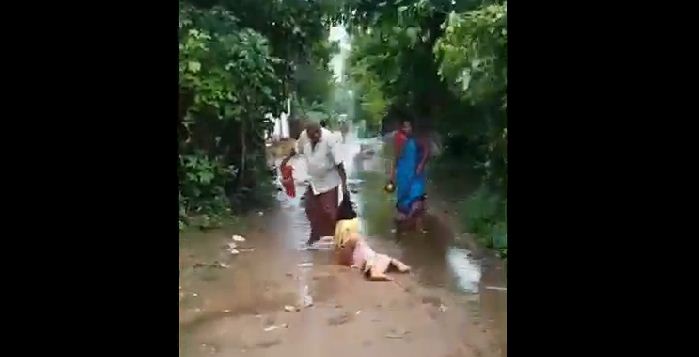 Jajpur: A petty family issue took an ugly turn at Dhaneswar village under Korei police limits in Odisha’s Jajpur district as a woman was allegedly dragged on road and assaulted by her in-laws.

A video of the incident, which took place yesterday, surfaced on social media and went viral. In the clip, Naveen Behera and his wife Charulata of the village can be seen thrashing and abusing their daughter-in-law on village road.

While Naveen grabbed the victim by her hair and dragged her on the road, Charulata was seen thrashing her with a stick.

After the video did the rounds on social media platforms, Korei police took suo moto cognizance of the matter, and detained the in-laws and husband of the woman.

She was allegedly tortured by her in-laws multiple times in the past over dowry demand. The woman had once consumed poison over the issue and was hospitalised, reports said.