Caught on camera: Trader robbed off Rs 11 lakh in front of DHH in Odisha’s Sambalpur

It is suspected that the miscreants had knowledge of the victim's whereabouts and were following him after he withdrew money from the bank. 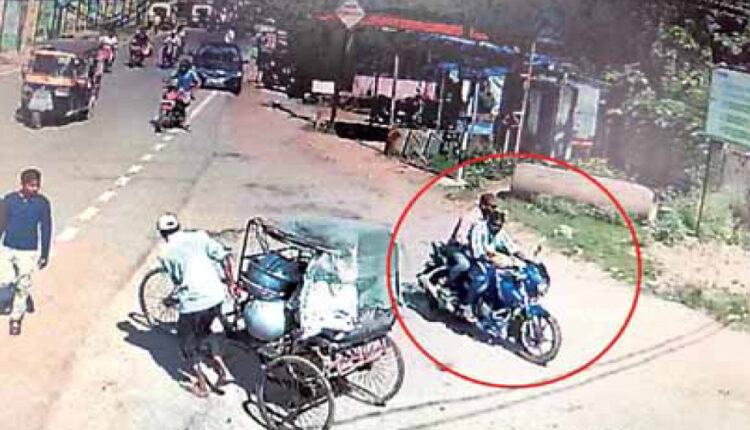 Sambalpur: In a broad daylight robbery, miscreants looted Rs 11 lakh from a trader near the busy road outside the district headquarters hospital (DHH) in Sambalpur here on Tuesday. While the incident was caught on camera, back to back loot incidents have sparked panic in the area as the heist comes just a day after a man was reportedly robbed of `2 lakh after withdrawing the money from the SBI bank branch near Ainthapali Chowk in the city.

As per reports, the victim, Mohammad Jeeshan of Motijharan under Dhanupali police station owns an AC repair shop near the DHH. In the afternoon on Tuesday, he left his two-wheeler outside to open the shop when suddenly two bike-born miscreants turned up, snatched the bag, which reportedly had Rs 11 lakh cash, from the dikki and sped away. As Jeeshan screamed, locals gathered and chased the accused till Mudipada overhead tank but the duo managed to flee.

According to Jeeshan, of the Rs 11 lakh cash, some of it was withdrawn by him from the bank recently while the rest was already there in the bag. While a case was registered with Town police, Sadar SDPO Pradip Sahu along with IIC Prakash Karna started investigation by scanning CCTV footages nearby.

As one of the footages had captured the incident where the accused are seen fleeing after snatching the bag, it is suspected that the miscreants had knowledge of the victim’s whereabouts and were following him after he withdrew money from the bank.

Sources said police have also detained some suspects for interrogation. Probe is underway.

It may be recalled that in January, a lawyer had been robbed of Rs 15 lakh in a similar fashion near a Shiv temple at Gengutipali village here. While the accused had been nabbed later, the recent cases have led to fears among the public that miscreants are targeting people who are coming to the bank for cash withdrawals.

World Arthritis Day 2022: Here are the primary reasons behind arthritis