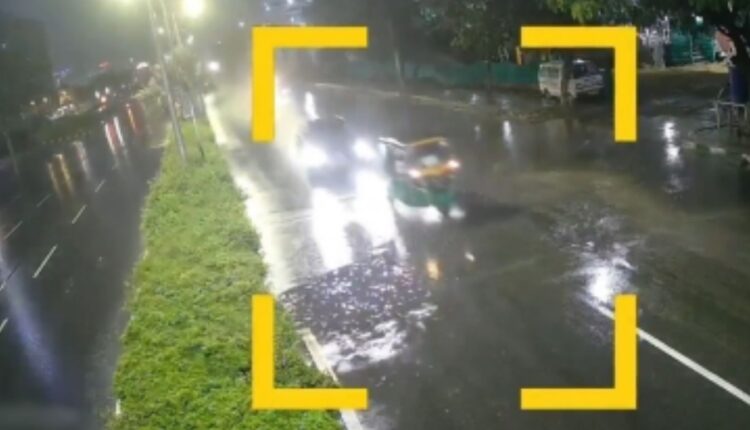 Hyderabad: Cyberabad police have arrested a youth who recklessly drove an Audi car killing a man travelling in an auto-rickshaw. The incident happened on Sunday.

Police arrested Sujith Reddy and his friend P. Ashish, who was travelling with him in the same car, which struck the autorickshaw from behind, near Inorbit Mall in the information technology hub of Madhapur.

According to Madhapur inspector Ravinder Prasad, a case of culpable homicide not amounting to murder has been booked against the Audi driver and his associate. Both are aged 24.

Sujith Reddy is studying at Indian Institute of Civil Engineering and Management, Goa while his friend is an employee of a software firm in Hyderabad. Both were returning from a party, and were drunk.

#WATCH | Hyderabad: Overspeeding luxury car hits auto from behind on the rain-drenched road near Cyberabad’s Inorbit Mall on June 27. A passenger riding in the auto was killed in the incident. pic.twitter.com/o3qpdEk0pp

Cyberabad Traffic Police on Tuesday released the horrific visuals of the accident that occurred around 5.30 a.m. on June 27. The car (Audi A8) being driven at a very high speed hit the three-wheeler from rear on the rain-drenched road.

“After travelling for some distance Sujith Reddy and Ashish got out of the car and tried to remove the number plate to wipe out any evidence,” the police official said.

When a security guard from a nearby building questioned them, they threatened him and escaped leaving behind the car.

Police have also booked Raghunandan Reddy for giving false information, and for harbouring his son.

The inspector said Sujith Reddy and Ashish were also booked for causing disappearance of evidence and criminal intimidation.

Odisha Matric Offline Exam-2021 to be held in July: BSE