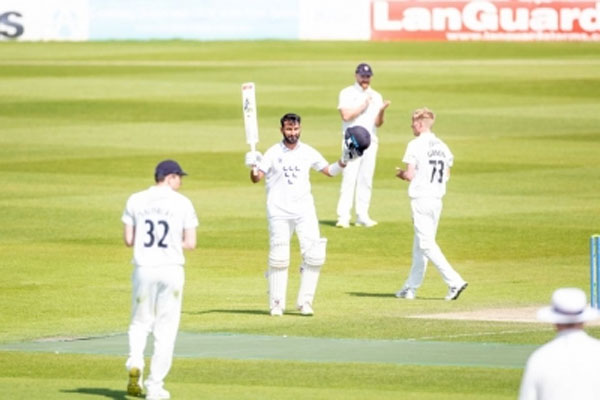 London: Indian batting stalwart Cheteshwar Pujara reached his second double-century since joining Sussex, to give the hosts a superb chance to secure their first win of the season in the LV= Insurance County Championship.

However, in the final half of the day on Saturday, an unbroken opening stand of 169 between Alex Lees and Sean Dickson gave Durham a chance of saving the match, after they had conceded a first-innings lead of 315.

Dickson completed his century just before the close, off 137 balls, while Lees finished with 50 not out, according to sussexcricket.co.uk. Earlier, Sussex had continued to dominate their fixture against one of the favourites for promotion as their overseas stars Pujara and Mohammad Rizwan put on 154 for the sixth wicket.

Pujara scored 203, his second double century in three matches, while Rizwan found his form on his home debut with an innings of 79 as Sussex piled on 538. There are enough cracks on the pitch to encourage the Sussex spinners on the final day. But Durham, who are 146 runs behind, have a good chance of a fighting draw on what is still a good surface.

In the first session on Saturday, Sussex scored 128 runs without losing a wicket. The game changed dramatically after lunch, when Sussex lost five wickets for 34 runs in nine overs as left-armer Liam Trevaskis followed his 88 runs with figures of 5/128. That still gave Sussex a huge first-innings advantage. But the Durham openers batted superbly in the final session to give their side hope.

The day started with Sussex on 362 for five, with Pujara 128 not out and Rizwan unbeaten on five. The Indian batting stalwart rocked onto the back foot and punched the first ball of the morning for four. He scored just eight runs in the opening 45 minutes, and it was Rizwan who was the more aggressive of the two batters, scoring 36 by the time the pair had put on fifty.

At lunch, Sussex had reached 490/5, a lead of 267, with Pujara 186 and Rizwan 74. The 150 partnerships, which coincided with the side reaching 500, came off 149 balls. But four runs later Rizwan was brilliantly caught at deep square-leg. Delray Rawlins, then got off the mark with a slogged six over midwicket but, pulling, was bowled for 12. Two overs later Pujara, venturing down the wicket to Trevaskis, was stumped. He faced 334 balls and struck 24 fours.

Pujara added 99 runs for the fourth wicket alongside Tom Alsop, 143 runs for the fifth wicket with Tom Clark and a terrific 154-run partnership alongside Rizwan for the next wicket during his marathon knock.

His knock came to an end after lasting at the crease for a whopping 118 overs when he was stumped off the last ball of the 152nd over of the innings.

Pujara has returned scores of 6, 201 not out, 109 and 203 in the four innings that he has played so far. With his latest feat, Pujara equalled a 28-year-old record as he became the second Indian after former Indian skipper Mohammad Azharuddin to make two double hundreds in the English County Championship. This was also Pujara’s 15th double hundred in his First-class career.