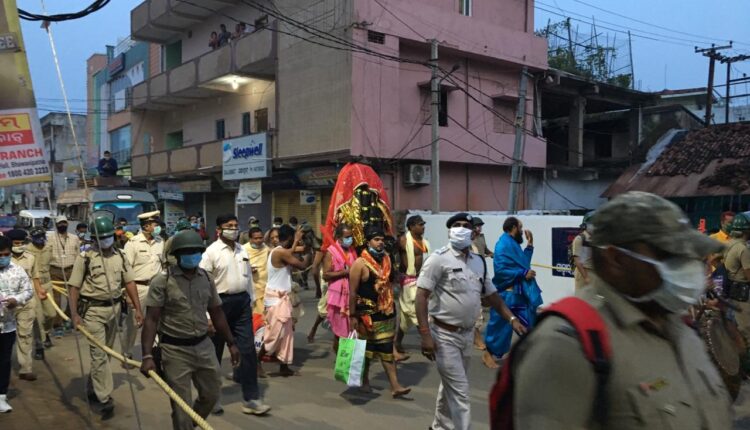 Bhawanipatna: The famous Chhatr Jatra of Maa Manikeswari was conducted amid COVID-19 restrictions and tight security without participation of devotees in Kalahandi district of Odisha today.

The festival began at around 5.25 am when the procession of Chhatar of Goddess Manikeswari was taken out to Jenakhol on outskirts of Bhawanipatna from the Manikeswari Temple following secret rituals. The ceremonial chhatar returned to the temple in a procession under restrictions to prevent congregation.

As per the order, no devotee was allowed to enter into the temple nor to take part in rituals during the event. As the animal sacrifice was banned as per the High Court order, the practice of age-old tradition of killing animals on the occasion was not reported so far.

The district administration had clamped Section-144 around the area to prevent congregation and mass animal slaughter during the Chhatar Jatra of Maa Manikeswari, the presiding deity of Kalahandi district, due to COVID-19 pandemic.

Every year as per tradition at the Manikeswari Temple, hundreds of innocent animals are killed on the road when the Chhatar of Maa Manikeswari is taken out from the main temple to Jenakhol, a distance of 3 km, in Bhawanipatna.

However, the age-old practice to offer animals to deity on Chhatar Jatra to fulfill their wishes was restricted this year in view of spread of COVID-19 infections in the community.

It is worth mentioning that Orissa High Court on January 6 had imposed a ban on sacrifice of animals and birds in and around Maa Manikeswari Temple during Chhatar Jatra in Kalahandi district. Recently, the Supreme Court put an interim stay on the High Court order of restricting animal sacrifice during the festival.