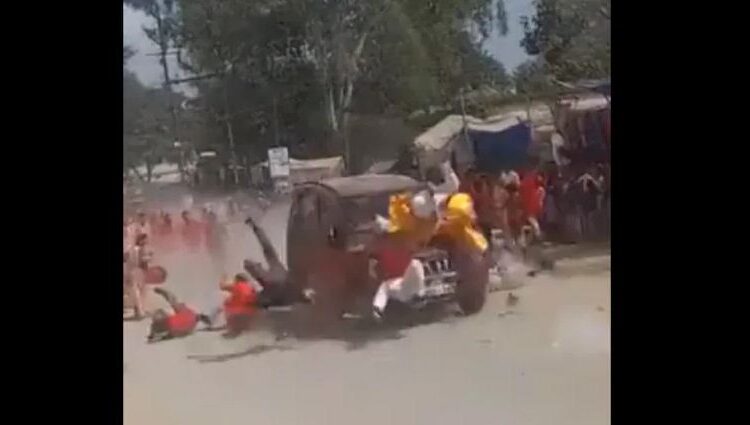 Jashpur (Chhattisgarh): At least four people were killed and over 15 others seriously injured as a speeding car ploughed into people proceeding to immerse a Durga idol in Pathalgaon area of Chhattisgarh’s Jashpur district on Friday, the police said.

“Four people have died and more than 15 are critically injured. Of them, around 8-9 have received serious injuries. The number of fatalities may increase,” said a police officer present at the spot.

Witnesses claimed that the driver deliberately targetted the gathering on Raigarh road, and a viral video of the incident makes for disturbing viewing.

The immersion procession had set out from Pathalgaon at around 1.30 p.m. when the maroon-coloured Sumo, being driven at a speed of 100-120 km per hour, crashed into it, throwing people around “like footballs” and crushing others, including a youth who died on the spot.

The deceased was identified as Gaurav Agarwal, 21. Details of the other deceased are not known yet.

Jashpur’s Superintendent of Police Vijay Agarwal told the media that the reckless driver was caught by the people and thrashed badly. A huge quantity of ganja was also found in the vehicle, which was set on fire by the enraged people.

However, a police officer said that there were two people in the car – Radheshyam Vishwakarma, 21, and Shishupal Shahu, both from Madhya Pradesh. Both have been arrested.

The incident created anger among the local people, who, along with the body of the killed youth, blocked the Gumla-Katni highway.

A police official said the situation was critical as more and more people from nearby areas gathered there.

“Somehow, we managed to control the situation. But people are still there on the spot. Senior officials have also reached there,” he added.