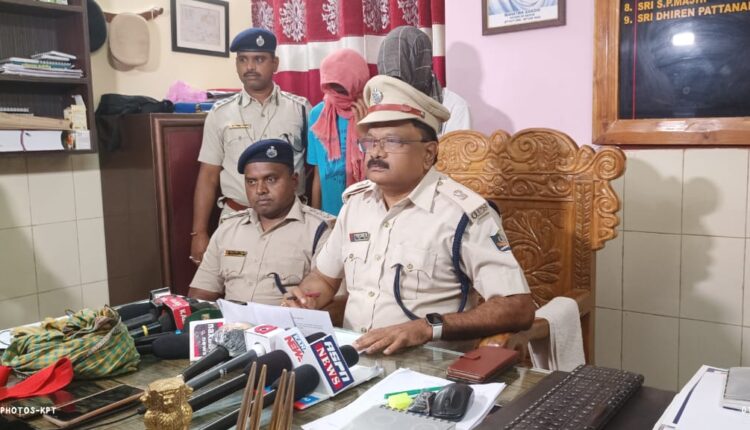 Koraput: Koraput Town Police arrested three persons including a minor on charges of kidnapping a Class 9 student and demanding ransom from his relative.

The accused persons were identified as Rahul alias Arpit Nayak (19), Sumit Kumar Suna (18) and Roshan (Name changed due to conceal the identity of the minor boy). All are from Koraput district.

According to reports, Sumit and the minor boy had kidnapped a Class 9 student for ransom and kept him inside an abandoned house for a night. They later shifted the victim on a two-wheeler to the house of their associate Rahul at Jayanagar area in Jeypore. Rahul kept him in a secluded place and sent photographs of the victim being tied with legs and hands to Sumit who demanded money from the victim’s relative identified as Manick Das of Railway Colony at Koraput Town Police Station area.

During the investigation, police found that Sumit and the minor accused had made a criminal conspiracy to kidnap the minor boy’s classmate for ransom from his family which was into gold business. After the student came to know about the plan, he alerted his friend asking him not to come out of house.

As the Class 9 student foiled their plan, Sumit and his minor friend abducted the minor boy on September 25. They took him on a two-wheeler bearing the Regd No. OD 10 B 8714 and left him at Rahul’s house in Jeypore. Later, they returned to Koraput. As per their plan, Rahul shifted the victim to an abandoned house at Phampuni and tied his hands and legs. He took snaps of the victim and forwarded the photographs to Sumit demanding money from the complainant, the police said in a release.

Police seized the two-wheeler used for kidnapping, a smartphone from possession of accused Sumit through which he had demanded ransom on a photo and video sharing social networking site, Rahul’s smartphone which was used to take photographs of the victim, a belt and towel used for tying the victim.