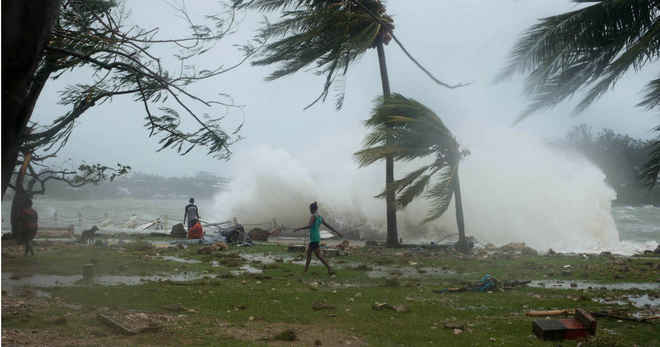 In the year 2018, the Intergovernmental Panel for Climate Change (IPCC), which is an intergovernmental body of the United Nations dedicated to create and share scientific information about human-induced climate change and its impact, shared its latest report wherein it shared several damning impacts of an increase of 1.5 degrees in the global temperatures. The Bay of Bengal region has long been identified as a hotspot for disasters and extreme events (nearly 44% of the coastline is at risk of submerging due to rising seawater levels and storm surges within the next few decades). Odisha is one of the most vulnerable states to the impacts of changing climate in the Bay of Bengal region. This is so, not just because of the physical impacts of climate change, but also due to the existing socio-economic vulnerabilities that have existed long before the climate change trends were visible. Nearly one-third of the state population lives in poverty, with twelve districts under constant threat of disasters such as cyclones, floods, earthquakes, and lightning strikes. With such a huge chunk of the population underprepared to face an upcoming crisis, one can assume disastrous results if adequate strategic planning and actions are not taken in time. After all, we need our communities to have basic facilities at the very least if we are to dream of climate-resilient communities, cities, and regions.

At the heart of understanding climate change associated risks, and their impacts are the governance pathways adopted towards climate action. In Odisha, the State Action Plan for Climate Change (2018-23) assumes centrality for any climate vulnerability mapping and material action. While the plan has existed since 2010, yet further probe on actual actions reveal contradictions. Over the past year, I have interacted with various officials in the state and central governments (bureaucrats, scientists, and local leaders), NGOs, activists, and residents. A senior state official, who was involved in the making of the Climate Plan was very candid: “We do not have any specific strategy for slums. As far as I remember, there was no discussion specifically about slums in the Climate Change Action Plan”. While this is not entirely surprising, given our legacy of planning being anti-poor and anti-slum dwellers, this approach still seems absurd, given that nearly one-fifth of Bhubaneswar city alone reside in slums (nearly 80,000 households house 1.8 lakh slum residents). Keeping them out of the planning discourse can be extremely costly in the long run- one can presume plenty of legal and street-level resistance and thus further loss of time.

While the plans do not do justice to the scholarly advancements in our understanding of the climate-development interactions in cities, the discourse on the making of the plan is not encouraging either. The climate plan, Smart City plan, and master plans exist in silos, with minimal overlaps – a clear sign of priorities of the state. A senior state bureaucrat, whom I interviewed recently summed up his frustration :

“For many departments, climate plan is just another task. Just write a few pages, and throw it on Forest department. First, are bureaucrats, of which I am a part, are we the right persons to understand the various issues of climate change? It is a science-based thing, requires a lot of research inputs, modeling. Neither do we have a set of passionate people, nor we have experts. As a result, what is happening, many of our climate change activities are basically ritualistic”.

You see, the problem lies in our complete apathy of the climate crisis. When was the last time a politician won or lost an election on an environmental issue? The climate discourse entered perhaps for the first time into the presidential election in the US recently, but even then the larger wave was related to anti-incumbency rather than the climate crisis.

Where do we go from here?

Sometimes, I often wonder what shall it take to prepare climate plans, keeping people and their aspirations at the heart of matters. By people, I of course mean ‘all’ people. A utopian thought of course, but occasionally possible.

The first step to do that is, of course, to begin with, an acknowledgment that climate resilience, social and economic inequity, and justice are not unrelated issues, but rather shape each other profoundly. We cannot begin to imagine resilient communities where there is a basic lack of equity, lack of distribution of services and utilities (let us start with sanitation, drinking water, and electricity), and caste/class/ethnic conflicts.

One of the main issues with climate planning and action is that the effects are slow, unlike an extreme event such as a flash flood, lightning, tsunami, or cyclones. As a result, these events trigger faster actions and attention from state officials and the community alike. Take the example of recent experiences of cyclone Fani and Amphan, wherein the post-disaster recovery action was focused on the conventional approach of relief distribution and rescue. While it works well for short term since it helps save lives, yet long term socio-economic condition takes a toll due to substantial loss of livelihood of communities. This approach is convenient for the state since it works well with a short election cycle thinking that politicians are unfortunately bound to. Yet, planners and bureaucrats need to take into account the possibilities of balancing between short-term actions and long-term risks and benefits that arise from decision-making systems.

To achieve the above two objectives, the media can potentially play a key role. The media, like the state, is usually influenced by the short-term-ness of events and politics while attempting to create sensationalism and novelty in everyday affairs. Yet, there are often articles and editors that provide space for long term thinking discourses. In this regard, the media can form the missing link between climate scientists, activists, bureaucrats, and elected officials. By bringing climate into the public discourse, the media can ensure that long term issues are debated before elections, thus taking advantage of the election cycles that often prove as a constraint. And for a state such as Odisha which is often battered by disasters, the media must push further to not just protect lives, but livelihoods and property as well, through further investments in mitigation and adaptation actions, which are people-centric, humane, and put the interests of the historically marginalized people in the forefront. The battles against climate (just like the Covid-19 pandemic challenge) will be won or lost not in the shopping malls and highways, but in the dark crevices and fault lines of our society – where the marginalized life and survive.

*The writer is a PhD candidate at School of Urban and Regional Planning , University of Alberta.