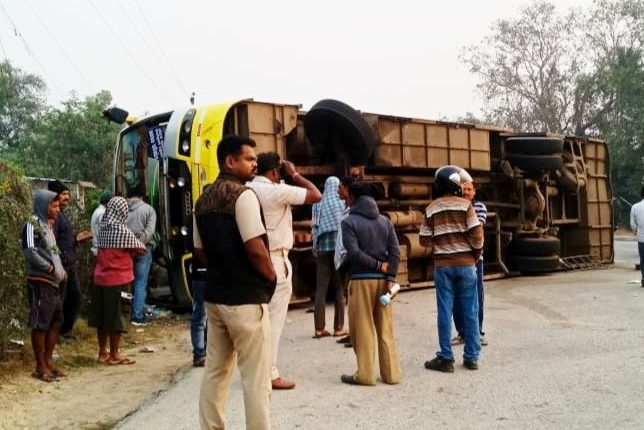 Sambalpur: A major mishap was averted after a bus en-route to Sambalpur was hit by a truck from the behind near Katapali Chhaka in Burla of Sambalpur district today.

Though no casualty was reported, at least two persons suffered injures in the mishap.

Sources said the private bus which was carrying 40 passengers on board was on its way to Sambalpur from Jeypore of Koraput district, when a truck all of a sudden collided with it from the behind at around 5.30am . The intensity of the crash was so high that the bus turned turtle after the driver lost control over the vehicle. As a result the bus driver and the conductor suffered grevious injuries.  All the injured were later rescued and given first aid and the severely injured were sent to Burla hospital for treatment. Besides, the bus was lifted with the help of a crane.

Around 25 students from Koraput Medical college were travelling to Burla Medical College in the bus when the accident occured.

As the truck driver had fled leaving his vehicle on the spot, police seized the  truck and started an inquiry into the incident.

No decision on NRC at national level, says govt