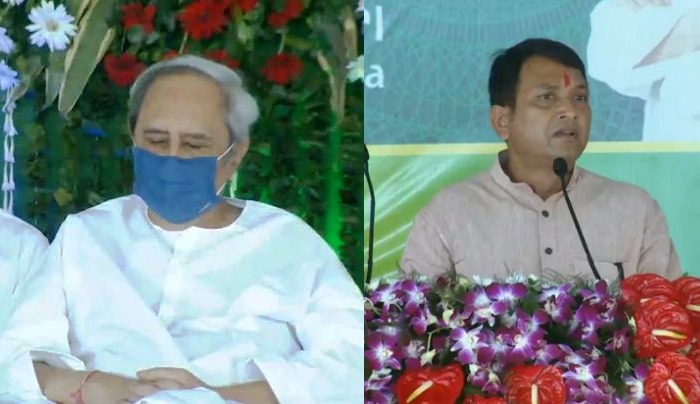 The Chief Minister today went to Kalahandi to launch the Smart Health Card under the Biju Swasthya Kalyan Yojana in the district. Mishra, MLA of Junagarh constituency in the district, joined the programme and shared the stage with the CM, besides praising Patnaik in his speech at the event.

On the other hand, the Odisha unit of the BJP today took out a rally from Rajmahal Square to Sishu Bhawan Square in Bhubaneswar protesting the Chief Minister’s visit to the district. A scuffle broke out between BJP workers and police at the Sishu Bhawan Square as the cops prevented the saffron party workers from heading towards Naveen Nivas, residence of the CM in the capital city.

Yesterday, BJP workers allegedly hurled eggs at a car in which Minister Dibya Shankar Mishra was travelling in Kalahandi. The saffron party workers opposed Mishra’s visit to the district and hurled eggs at the vehicle besides showing him black flags near the College Chhak as the minister was heading towards Junagarh for attending a programme organised by the Biju Janata Dal (BJD).

Party’s organisational secretary Pranab Prakash Das was present with Mishra inside the car. Subsequently, a scuffle broke out between the workers of the BJD and the BJP at the spot.

The murder of 24-year-old Mamita Meher of Jharni village under Turekela block of Balangir district had sent shockwaves across the state. While Mamita was working as a teacher at the Sunshine English Medium School at Mahaling in Kalahandi district, Sahu was the managing committee president of the educational institution.

CBI not answer to every problem: Supreme Court on Lakhimpur Kheri incident