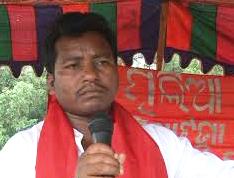 According to reports, Linga, currently lodged in Koraput Circle Jail here after his arrest in 2014, sent his nomination paper for Narayanpatna Zilla Parishad member to the district returning officer through his counsel.

Notably, Linga had surrendered before police on October 28, 2014 following which he was arrested.

With the help of left wing extremists, Linga had allegedly set up CMAS and become its leader demanding land settlement in Narayanpatna and Bandhugaon blocks of Koraput district. The CMAS members had also forcibly acquired land of non-tribals in Narayanpatna block leading to law and order problems in the locality.

This apart, several cases of murder, attack on police stations, arson, instigating tribals to taking law into their hands were pending against Linga in different police stations.