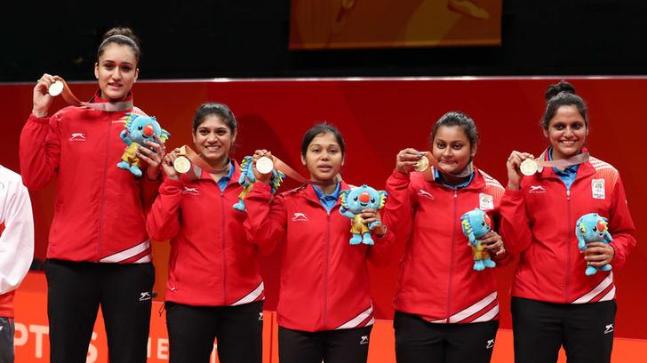 Cuttack: Indian men and women were the first to book their semifinal slots after winning their Super Eights group matches in the 21st Commonwealth Table Tennis Championships at the Jawaharlal Nehru Indoor Stadium here on Thursday.

Though the Indian men have a formality to complete — they play their last match against Wales in group F — the women finished their engagements in group F with emphatic triumphs over Wales (3-0), Malaysia (3-0) and Nigeria (3-0).

Earlier, the men’s team defeated Sri Lanka and Malaysia with an identical 3-0 margin to seal their berth in the semifinal.

Anthony Amalraj, who got to play his matches on Thursday, had it rather easy against Sri Lankan Krishan Wickramaratha, cleaning him up with a 3-0 verdict in the opener though he was found to be struggling a bit against Malaysian Feng Chee Leong. But the Indian overcame the initial hiccups to beat him 3-1.

As for the rest of the matches, they were as simple as they can get as G. Sathiyan and Manav Thakkar formed part of the squad against Sri Lanka while Sharath Kamal and Harmeet Desai were pitted against Malaysia.

Coaches Australian Brett Clarke and Soumyadeep Roy gave ample opportunities to all the players before the knockouts on Friday.

Archana Kamath was the common factor in all the three women’s matches while the two coaches rotated the other players, including Manika Batra, Madhurika Patkar, Sutirtha Mukherjee and Ayhika Mukherjee. All the players came out with flying colours against their respective opponents.

Besides India, England men and women too made the semifinal grade after notching up two wins each. Their men beat Singapore 3-2 while they claimed a 3-1 victory over Australia. Their women, on the other hand, beat Australia 3-1 and then trounced Sri Lanka 3-0.

With two semifinal slots left in each of the two sections, the teams that look to book their berths are Singapore and Nigeria, barring a problem or two in the last match.

In individual events, only one of the two Indians, G. Sathiyan and Manav Thakkar, would progress to the medal round as they were drawn in the same quarter while the other three Indians were lucky to find themselves evenly distributed into the other quarterfinals.

All the Indian male players were among the top eight seeds (based on their ITTF July rankings) while only three women — Manika Batra, Archana Kamath and Madhurika Patkar — were seeded and got first-round byes in the main draw. The remaining two — Sutirtha and Ayhika — will have to make it to the main draw through qualifiers.