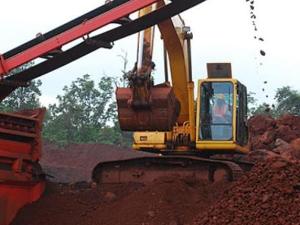 In August 2011, a team of officials from Odisha’s department of steel and mines visited Thakurani B, one of the largest iron ore mines in the state, with 270 million tonnes of reserves. The team found that Sarda Mines Private Limited, the company that holds the mining rights to Thakurani B, had sold the entire unprocessed ore from the mine to another company, Jindal Steel and Power Limited, at less than 10% of the market price. The chairman of Jindal Steel and Power Limited is former Congress MP, Naveen Jindal.

Why would SMPL sell ore cheaply to an unrelated company?

“The major benefit of the mine is flowing to M/s JSPL,” said the department report. This amounted to “transferring the interest in the mining lease” in violation of Rule 37 of the Mines and Mineral Development and Regulation Act 1957.

Under Rule 37, the holder of a mining lease cannot transfer, sublet or mortgage it without the consent of the state government.

Looking at Thakurani B more closely, a commission led by former judge MB Shah, tasked with investigating illegal mining in India, placed on record the allegations that SMPL was controlled and financed by a firm whose directors were also the directors of Jindal group companies.

“This corporate veil is required to be further investigated, layer by layer,” it said, “to know the exact control/finance of the Thakurani mining lease.”

Regulatory filings made by SMPL with the Ministry of Corporate Affairs, and accessed byScroll, show that individuals and firms associated with the Naveen Jindal group have owned shares of the company operating Thakurani B since September 30, 2006.

In November 2001, three months after the mining lease was given to them, brothers Sunderlal Sarda and Mohan Lal Sarda approached the government of Odisha seeking permission to transfer their mining rights to a company. They said that if the mine was housed in a corporate entity, it would make it easier for them to raise bank funds for mining operations.

On June 22, 2006, the government of Orissa allowed the transfer of the mining lease from the Sarda family to a company, Sarda Mines Private Limited, which was then fully owned by members of the Sarda family.

Three months later, on September 30, 2006, the family’s shareholding in the company plunged to 1%, as SMPL issued shares worth Rs 2.45 crore each to Dinkar Trading and Timeless Home Builders.

The table shows how the shareholding pattern of the companies changed.

Table: How the ownership of the companies changed 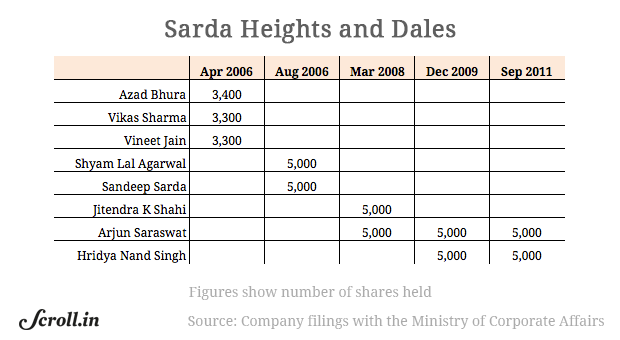 Several shareholders and directors of both the controlling firms are associated with the Jindal Group.

Rajeev Jain is a director at Jindal Realty and other Jindal group firms. He is also a director at both the companies holding stake in SMPL.

Jagran Agents’ shareholders in 2007 included Anand Goel, SP Singh, Rajeev Jain and Azad Bhura, all of whom have been directors at several Jindal Group firms.

PC Mittal is the Vice President (legal) at Shree Vaishnav Agarsain Gaushala, a cow shelter run by the Jindal family at Hisar.

Vineet Jain was the director of Jindal Realty at the time he picked up shares in Sarda Heights and Dales.

Arjun Saraswat, who holds more than 50% of SMPL’s shares, is a director and shareholder in several companies whose most significant business transactions are with companies associated with JSPL. He is the director and shareholder in Zurich Securities. As of March 2010, its balance sheet was Rs 185 crore – Rs 109 crore of borrowings from Oswal Chemicals and Fertilisers, a company promoted by Abhey Oswal, Naveen Jindal’s father-in-law, and Rs 74 crore from Natma Securities, a firm which shares directors with Jindal group companies.

Saraswat is also a director in Blackrock Securities since September 2008. Until 2012, the latest data available, 45% of Blackrock was held by New Delhi Exim, a company named by the Central Bureau of Investigation in a coal-block allotment case along with Naveen Jindal and former coal minister Dasari Narayana Rao.

On Twitter, Arjun Saraswat follows only one person: Naveen Jindal.

Also noteworthy is the fact that Sarda Merchandise and Sarda Heights and Dales have the same registered address as Jindal Realty, a Jindal group company named by the CBI in a coal-block allotment case: Flat No. 1104, 11th Floor, 89, Nehru Place, New Delhi.

A spokesperson of JSPL declined to comment on the ownership of Thakurani B, saying “the matter was sub judice”.

The transfer of ownership of SMPL to individuals and firms associated with the Jindal group helps explain why SMPL sold ore cheaply to JSPL. The 2011 report of Odisha’s department of steel and mines said that the underpricing of ore had caused losses to the state by depriving it of royalties and taxes. If the sale price had been closer to the market price, the state would have earned ten times the amount in royalties.

Underreporting of the price of ore mined from Thakurani B also depressed the rate of royalty for the rest of the state. Mineral royalty is calculated on the basis of average price charged by the ten largest mines in the state. Thakurani B was one of them.

In addition, the report pointed out that JSPL processed the ore in crushing units that were operating in the leasehold area without the state’s permission. This had deprived the state of taxes that it could have levied on the processing of ore.

The JSPL spokesperson told Scroll that the department’s findings were “not justified at all” since the ore needed a lot of processing, whereas the department report had compared it to the price of calibrated lumpy ore of the best grade.

The Shah Commission documented other irregularities in the mine. The mine had operated without environmental clearance for four years. In subsequent years, the mineral extracted had been beyond permissible limits. Altogether, 28.2 million tonnes of iron ore had been mined in Thakurani B in violation of the mining and environmental laws, the commission found.

An email to the management of SMPL went unanswered. Arjun Saraswat, the director of SMPL, did not respond to phone calls.

The Thakurani B mine is located in Keonjhar, one of the poorest districts in Odisha, which is one of the poorest states of India. According to the Shah Commission, iron ore and manganese worth Rs 59,203 crore was illegally mined in Odisha’s Keonjhar and Sundargarh districts between 2000-’10. The commission has recommended that the state recover this amount from the companies and use it for the development of the two districts to “remove the poverty of the tribals who are affected or whose lands are used for mining purpose”. According to the commission, Thakurani B mine alone accounted for illegally mined iron ore worth Rs 2,845 crore.

The case in the Supreme Court

One of those pertained to Rule 37. “In the private limited company, the original lease holder(s) hold about 1% of the equity shares whereas 99% are held by others. Will this amount to violation of Rule 37 particularly when such a view has been taken by the State in other cases,” it asked.

The Central Empowered Committee is expected to submit its report to the Supreme Court soon.

If the Central Empowered Committee were to uphold the charge of Rule 37 violation, it would have a two-fold implication.

Those controlling Thakurani B would risk losing mining rights.

Two, it could also jeopardise JSPL’s case for Thakurani A, the adjoining mine that the company has been seeking to acquire on the promise of investments in iron and steel projects in Odisha. But the state’s assurance of captive raw material for the company’s projects is conditional to JSPL not having an existing mining area “or controlling interest in any company or concern having mining areas for the relevant mineral in the state”.

Such conditions are usually laid down by state governments to prevent the concentration of ownership of mineral resources in the hands of a few. To enforce the conditions, Rule 37 is vital, for it allows the state to keep tabs on the ownership of mines.

There is, however, a legal technicality that could preempt the owners of Thakurani B facing an adverse order in the Supreme Court.

Last year, after the judges ordered an enquiry into Thakurani B, SMPL’s lawyers argued that Odisha High Court was already examining the mine for violation of Rule 37, and hence the Central Empowered Committee investigation should be restricted to forest and environmental violations. In January, the Supreme Court accepted the argument, which means Rule 37 might well lie outside the purview of the Central Empowered Committee report.

*Supriya Sharma is a senior journalist, who has worked earlier with the NDTV and The Times of India. She currently works with the news portal Scroll.in.

**  This has been published with permission from Scroll.in where it appeared on September 26, 2014 ( http://scroll.in/article/680475/How-the-Naveen-Jindal-group-may-be-conducting-proxy-mining-in-Odisha). The second part of the article will look at the larger implications of the case of Thakurani B for India’s mining sector.